Adapted from the 1952 novel Zorba the Greek by Nikos Kazantzakis and the subsequent 1964 film of the same name, it focuses on the friendship that evolves between Zorba and Nikos, a young American who has inherited an abandoned mine on Crete, and their romantic relationships with a local widow and a French woman, respectively.

The setting is Crete in 1924. Nikos, a young student, has inherited a mine which he plans to resurrect to its working state. With his new friend, Zorba, he travels from Piraeus and lodges with a French woman, Hortense. It soon becomes apparent that Zorba and Hortense are attracted to each other and there soon becomes a romantic involvement. Zorba tries to get Nikos interested in a young Widow who brings them lunch but Nikos treads wearily. Zorba is very much his own man and a law unto himself. Nikos has given him money with which to buy supplies to enable them to reopen the mine but Zorba goes off and spends it all on a belly dancer. Hortense, meanwhile is romantically dreaming of marriage with Zorba - and a wedding ring! Despite his misgivings Nikos plucks up his courage and goes to visit the Widow. Their meeting is witnessed by a young man, Pavli, who is somewhat mentally unbalanced. resulting from witnessing the assignation of the Widow and Nikos, Pavli throws himself into the sea.
Next morning, village celebrations are stilled when Pavli's body is washed up onto the shore. Zorba returns to the village with no supplies for the mine, no money and no wedding ring for Hortense. Nikos tells the Widow how much she means to him - and the feelings are reciprocated. But their love comes too late. A member of Pavli's family stabs her to death, blaming her for Pavli's suicide. The bad news does not stop here. A survey of the mine shows that it has been closed too long and that it will be impossible to reopen it. Zorba is a philosophical man, but Nikos cannot understand Zorba's attitude to those who killed the Widow. Zorba explains that one must accept death as one accepts life, all there is left to do is dance.
Hortense has become very ill and in her delirium, she imagines she is a young girl again. Zorba rushes to her side but to no avail. Nikos and Zorba, in their mutual grief, begin to dance. Nikos decides to return to Athens - and Zorba to wherever life leads him.

Original Broadway Production
The musical opened on Broadway on November 16, 1968 at the Imperial Theatre, where it ran for 305 performances and twelve previews. Directed by Harold Prince and choreographed by Ron Field, the cast included Herschel Bernardi, Maria Karnilova, Carmen Alvarez, John Cunningham, and Lorraine Serabian. Scenic design was by Boris Aronson, costume design was by Patricia Zipprodt, and lighting design was by Richard Pilbrow.
The production received several Tony Award nominations, winning the Tony Award for Best Scenic Design.

1970 US tour
The musical was revised to be less "austere" and toured with John Raitt, and included a new song for him ("Bouboulina"). Chita Rivera played the role of "The Leader". Because reviews were not favorable, the show did not return to Broadway at that time.
The bus and truck tour featured Vivian Blaine ("Guys and Dolls") as Madam Hortense and Michael Kermoyan ("Camelot" & "Anya") in the title role, with Prince directing and choreography by Patricia Birch.

1983 Broadway Revival
The 1983 revival directed by Michael Cacoyannis and choreographed by Graciela Daniele opened on October 16, 1983 at the Broadway Theatre, where it ran for 362 performances and 14 previews. The cast included Anthony Quinn and Lila Kedrova (who had both starred in the film version, the latter winning an Oscar for her performance), in addition to Robert Westenberg, Debbie Shapiro, and Rob Marshall.

Broadway Revival
Zorba was expected to be revived on Broadway in 2011, with David Leveaux set to direct. Antonio Banderas had been chosen as Zorba.[4] In an interview with producer Fran Weissler, the revival of Zorba is set for 2011-2012. As of May 2015 this revival has not been produced. Cara Joy David, writing in the Huffington Post in January 2015, wrote: "Zorba...The production was expected to be mounted during the 2011-2012 theatrical season. Alas it never came to be.... or at least not yet."

Concert production
Zorba was presented in the New York City Center Encores! staged concert series on May 6-10, 2015. The cast featured John Turturro, Zoe Wanamaker, and Marin Mazzie in the lead roles and direction by Walter Bobbie.[7] 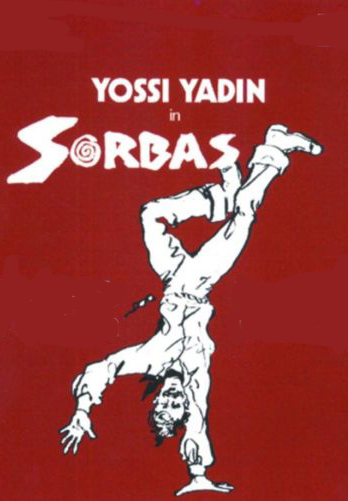