This musical had an original story. It's set in 1933 Chicago, in Harry Earle's Burlesk [sic] and the city. The burlesque house has two companies, white and black, and as the town is touchy about "mixin'," the companies cannot mingle on or offstage. The principal black characters are LeRoy, the comic, and Satin the stripper; the principal white performer is Gus, a comedian. LeRoy loves Satin but cannot express his feelings to her except in crude, offputting burlesque routines. Gus is going blind and is in danger of losing his career, so he enlists a helper, an Irish bum named Doyle, as his primary stooge. Doyle has his own demons, but he proves to be a useful addition to both companies. For one thing, he's the only person who can ride a bike, so he's picked to deliver a bike to the birthday party of Satin's little brother Grover. Unfortunately, toughs take offense to this mixing of white and black, and the bike is destroyed. LeRoy, unable to deal with the violence, retreats into a burlesque routine.

Gus's eyesight is now too poor for him to continue performing, and he commits suicide. Doyle is devastated and disappears during the memorial service. Satin and LeRoy search for him, unsuccessfully; LeRoy is finally able to confess his love for Satin, who is thrilled, and they arrange to meet for dinner. But on her way to meet him, Satin finds Doyle, drunk and being set upon by toughs. She rescues him and takes him home. As he sleeps, he talks, and reveals that he was an Irish terrorist who accidentally killed his wife and son.

Next morning, Satin returns to the theatre only to encounter LeRoy, feeling rejected. He humiliates her onstage and then attacks Doyle, causing the two companies to take sides (along racial lines) in the conflict. However, when those ubiquitous toughs invade the theatre, the companies become one company as they fight the common enemy.

Act I
This Must Be the Place - Company
Cadava - Solly, Gus and Romaine
A Sweet Thing Like Me - Satin and Earle's Pearls
I Get Myself Out - Gus
My Daddy Always Taught Me To Share - Leroy
All Things To One Man - Satin
The Line - Leroy and Earl's Pearls
Katie, My Love - Doyle
The Grind - Gus and Company
Yes, Ma'am - Doyle
Why, Mama, Why - Satin and Leroy
This Crazy Place - Leroy and Company

Act II
From The Ankles Down - Leroy and Earle's Pearls
Who Is He - Satin
Never Put It In Writing - Gus
I Talk, You Talk - Doyle
Timing - Romaine and Solly
These Eyes of Mine - Maybelle and Company
New Man - Leroy
Down - Doyle
A Century Of Progress - Leroy, Satin and Earle's Pearls
Finale - Company 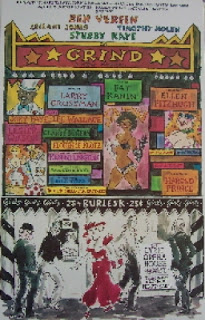 Even critics who hated Grind were impressed by Leilani Jones' performance: Frank Rich wrote: "Miss Jones, in her Broadway debut, is a find - a gifted young performer lacking only a little flash." She received the Tony Award, the Drama Desk Award, and the Theatre World Award as Best Featured Actress in a Musical that year.