Peggy-Ann Barnes dreams of a trip on a yacht, a ride in an airplane, marriage to a millionaire. Then she wakes up and philosophically goes back to being a drudge.

Peggy-Ann was a study in the unusual. It violated every musical-comedy tradition, borrowed a few more from other art forms, and then violated them too. There was no opening chorus. In the first 15 minutes there was no singing or dancing at all. The plot was simply one long dream. The eternal musical-comedy love story was kidded. The chorus danced in a sort of planned chaos. The lights misbehaved with a sort of wayward intelligence of their own, the spotlight was never in the right place, and the footlights and borderlights went on and off willfully.
The dancing when it finally arrived, was an abrupt departure from the collection of speedy routines and specialty numbers which is still standard fare in musicals. It was a musical that ended with a whisper and a laugh.

Based on the 1910 musical Tillie’s Nightmare by Edgar Smith.

The musical opened on Broadway at the Vanderbilt Theatre on December 27, 1926 and closed on October 29, 1927, after 333 performances. It was produced by Lew Fields (Herbert's father) and Lyle D. Andrews. Staged by Robert Milton, with musical staging by Seymour Felix, it starred Helen Ford as Peggy-Ann, Lester Cole, Lulu McConnell, and Betty Starbuck.

The musical opened in the West End at Daly's Theatre on July 29, 1927 and ran for 130 performances. Directed by Lew Fields, Dorothy Dickson starred as Peggy-Ann.

The musical was considered daring for its time: there was no opening chorus and no songs for the first 15 minutes.[1] The plot, told in one long dream, focuses on Peggy-Ann’s dream fantasies. She is the niece of the owner of a boarding house in New York and the fiancée of a local boy. She escapes from a hum-drum life through dreams of herself as a wealthy adventuress, with a yacht and a husband.

Its Broadway premiere was on December 27, 1926 and it ran for 333 performances. It came at the end of an amazing year for Rodgers & Hart: five of their shows had Broadway openings in 1926 - the fifth, “Betsy” opened just one night after “Peggy Ann”. The London adaptation was considered to be somewhat thrown together, with bits of the “Dick Whittington” story mixed in. The Stage review felt a song in the nightclub was highly improper, and there were “suggestions of the unpleasant in several of the lyrics by Lorenz Hart”.

"Hello"
"A Tree in the Park"
"Howdy Broadway" (Howdy to Broadway)

Act 1
"A Little Birdie Told Me So"
"Charming, Charming"
"Where’s That Rainbow?" 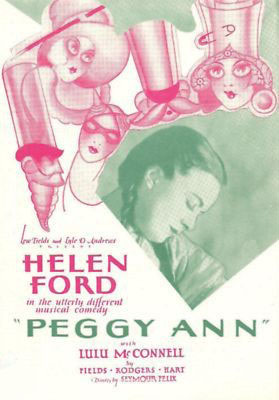 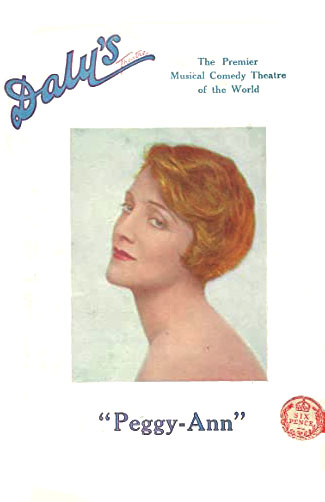