Several versions of Peter Pan were mounted early in the 20th century. In a nod to the original play, and the pantomime tradition it derives from, the title character of Peter Pan in the musical is usually played by a woman, including Mary Martin, Sandy Duncan and Cathy Rigby, among others.
Producer Edwin Lester, founder and director of the Los Angeles Civic Light Opera, obtained the American rights to Peter Pan and adapted it as a play with music for Mary Martin. The show was not successful in its pre-Broadway West Coast tour, so director Jerome Robbins hired lyricists Comden and Green and composer Jule Styne to add more songs, including "Never Never Land," "Distant Melody" and several other numbers, turning the show into a full-scale musical. The musical, instead of using Barrie's original ending, in which Peter simply allowed Wendy and the other children to return home, includes an additional scene that Barrie had written later and titled An Afterthought. In this ending, Peter returns after many years to take Wendy back to Never Never Land for spring cleaning. He finds that he has been away so long that Wendy is now an adult, married woman with a daughter. Despondent at first, he is delighted when Wendy's daughter Jane offers to be his new mother, and instead takes her with him.

The 1954 musical version of Peter Pan opened on October 20, 1954 at the Winter Garden Theatre in New York for a planned limited run of 152 performances. The show had been sold to NBC, which ensured that it was a financial success despite the limited run. It played its final performance on February 26, 1955. The revised score and Tony Award-winning performances by Martin and Ritchard made Peter Pan a success. A Broadway cast album was made of the songs, and is still in print today.
The show opened in a busy Broadway season, competing with such notable shows as The Boy Friend, Fanny, Silk Stockings, and Damn Yankees. However, while still in tryouts in Los Angeles, a deal was made for the show to be broadcast on the NBC anthology series Producers' Showcase on March 7, 1955. The show closed so that it could be broadcast on television, although box office continued to be strong throughout the Broadway run.

Television productions
In 1954, Fred Coe, production manager for NBC in New York, began producing Producers' Showcase, a 90-minute anthology series that aired every fourth Monday for three seasons. One aim of the series was to broadcast expensive color spectaculars to promote the new color television system developed by NBC's parent company RCA.
On March 7, 1955, NBC presented Peter Pan live as part of Producers' Showcase (with nearly all of the show's original cast) as the first full-length Broadway production on color TV. The show attracted a then-record audience of 65-million viewers, the highest ever up to that time for a single television program. Mary Martin and Cyril Ritchard had already won Tony Awards for their stage performances, and Martin won an Emmy Award for the television production. It was so well received that the musical was restaged live for television (again on Producers' Showcase) on January 9, 1956. Both of these broadcasts were produced live and in color, but only black-and-white kinescope recordings survive.
Peter Pan was restaged on December 8, 1960, this time in a 100 minute version rather than 90 minutes (not counting the commercials), and with a slightly different cast because the original children had outgrown their roles. Producers' Showcase had long since gone off the air, so the 1960 production was intended as a "stand alone" special instead of an episode of an anthology series. Act II was split into two acts, for a total of five acts instead of three, to allow for more commercial breaks. This version was videotaped in color at NBC's Brooklyn studio. Martin was also starring in Broadway's The Sound of Music at the time. The production was directed for television by Vincent J. Donehue, who received a Director's Guild Award for it. Peter Foy re-created the signature flying sequences he had staged for the 1954 Broadway production and the two Producers' Showcase broadcasts. This 1960 version was rebroadcast in 1963, 1966 and 1973. The video tape of that production was restored and rebroadcast by NBC on March 24, 1989, then again in 1990, after which it went to the Disney Channel, where it was shown several times more. Unfortunately, beginning in 1989, the program was slightly cut to make room for more commercial time. Eliminated completely was a dance that Liza (the Darling family maid) and the animals of Neverland perform to an orchestral version of Never Never Land. Also eliminated was Mary Martin's curtain speech at the end thanking NBC for making the program possible, which, in the 1960, 1963, and 1966 telecasts led directly into the closing credits. Gone also, strangely enough, was the intertitle bearing the credit Peter Pan: Act III, but not the other intertitle credits, so that the show seemed to be performed in three acts, just as in the stage version. The screen credit Peter Pan: Act IV, however, did remain, so that it seemed as if there had been a technical oversight in not changing it.
This 1960 production of Peter Pan was released on VHS home video on Aug 28, 1990 (not 1998, as stated on Amazon), on LV (date unknown), and on DVD on October 19, 1999.
None of the three Mary Martin television versions of Peter Pan was telecast from a theatre with a live audience. All three were performed in the NBC studios.

Later revivals
The show was revived in 1979 on Broadway at the Lunt-Fontanne Theatre, produced by Nancy and Ronnie Horowitz, starring Sandy Duncan and George Rose, and ran for 554 performances. Duncan was nominated for the Best Actress Tony, and the show was nominated for Best Revival of a Musical.
A third Broadway production was mounted in 1990, originally at the Lunt-Fontanne, running for 45 performances. A return engagement opened 10 months later, this time at the Minskoff Theatre, running for an additional 48 performances. Both engagements starred former Olympic gymnast Cathy Rigby as Peter; the first co-starred Stephen Hanan and the second J. K. Simmons. The production was nominated for Best Revival of a Musical at the 1991 Tonys, and Rigby was nominated for Best Actress. Rigby returned to Broadway as Peter Pan in 1998 at the Marquis Theatre, with Paul Schoeffler co-starring. This production ran for 48 performances. A return engagement with the same stars opened in 1999 at the George Gershwin Theatre and ran for 166 performances. This engagement was nominated for the 1999 Tony for Best Revival of a Musical. It was then recorded at the La Mirada Theater for broadcast in October 2000 on the A&E Network. The video release cuts the program to about 96 minutes and was shot using eight cameras, produced by Line By Line Productions for McCoy/Rigby Entertainment, directed by Gary Halvorson and produced by Marc Bauman. Designers of the production were John Iacovelli (set), Shigeru Yaji (costumes) and Martin Aronstein (lights). Flying illusions are by ZFX Inc. Craig Barna is the musical director. It reconceived the potentially offensive "Ugg-a-Wugg" song about Native Americans as a percussive dance number. The flying effects were changed to include some flights that were not practical to do in the theatrical version, such as the somersault flips during "I'm Flying", and electronically erasing the wires.
Jack Noseworthy is the only male actor to have played Peter Pan on Broadway; he was an understudy in the revue Jerome Robbins' Broadway.

• Peter Pan: He is played by a woman in the musical. Mary Martin, who played the role in several productions, was an alto. A boy who does not want to grow up, who can fly.
• Tinker Bell: She is a non-singer. A fairy, represented only by a tiny flashing light. Her "dialogue" is only heard as tinkling music played by a celesta in the orchestra. She does not speak as we know it, and the other characters "translate" what she "says".
The Darling Family, both generations
• Wendy Moira Angela Darling: the eldest of the Darling children. She is a soprano.
• John Darling: Wendy's younger brother. He is a boy soprano, although the 1960 production used a boy whose voice had already begun to change.
• Michael Darling: Wendy's youngest brother. He is a boy soprano.
• Mr. George Darling: the father of the Darling family. He is a baritone/tenor.
• Mrs. Mary Darling, their mother (played by a non-singing actress, who nevertheless sings in two musical numbers)
• Nana, the dog/nurse (barking only, pre-recorded)
• Liza, the family's maid (alto)
• Jane, Wendy's daughter (non-singing role, but should have a family resemblance to Wendy)
The Lost Boys of Neverland
• Slightly Soiled, the most conceited. (boy soprano)
• Tootles, the youngest one (boy soprano)
• Twin #1 (boy soprano), Twin #2 (boy soprano), Curly (boy soprano), Nibs (boy soprano)
Tiger Lily, the princess of the Indian tribe (Alto)
The Pirates
• Captain James 'Jas' Hook, Peter's nemesis, usually played by the same actor who plays Mr. Darling. (Baritone/Tenor)
• Smee, Hook's comedic sidekick (non-singing role)
• Starkey, Bill Jukes, Cecco, Noodler, Mullins, Cookson, Skylights, Alf Mason, Alsatian Fogarty, Albino, Quang Lee, Bollard, Giant Pirate,
There are also animals in Never Never Land, who make animal noises, but have no dialogue. These, like Nana, are also played by people in costumes. 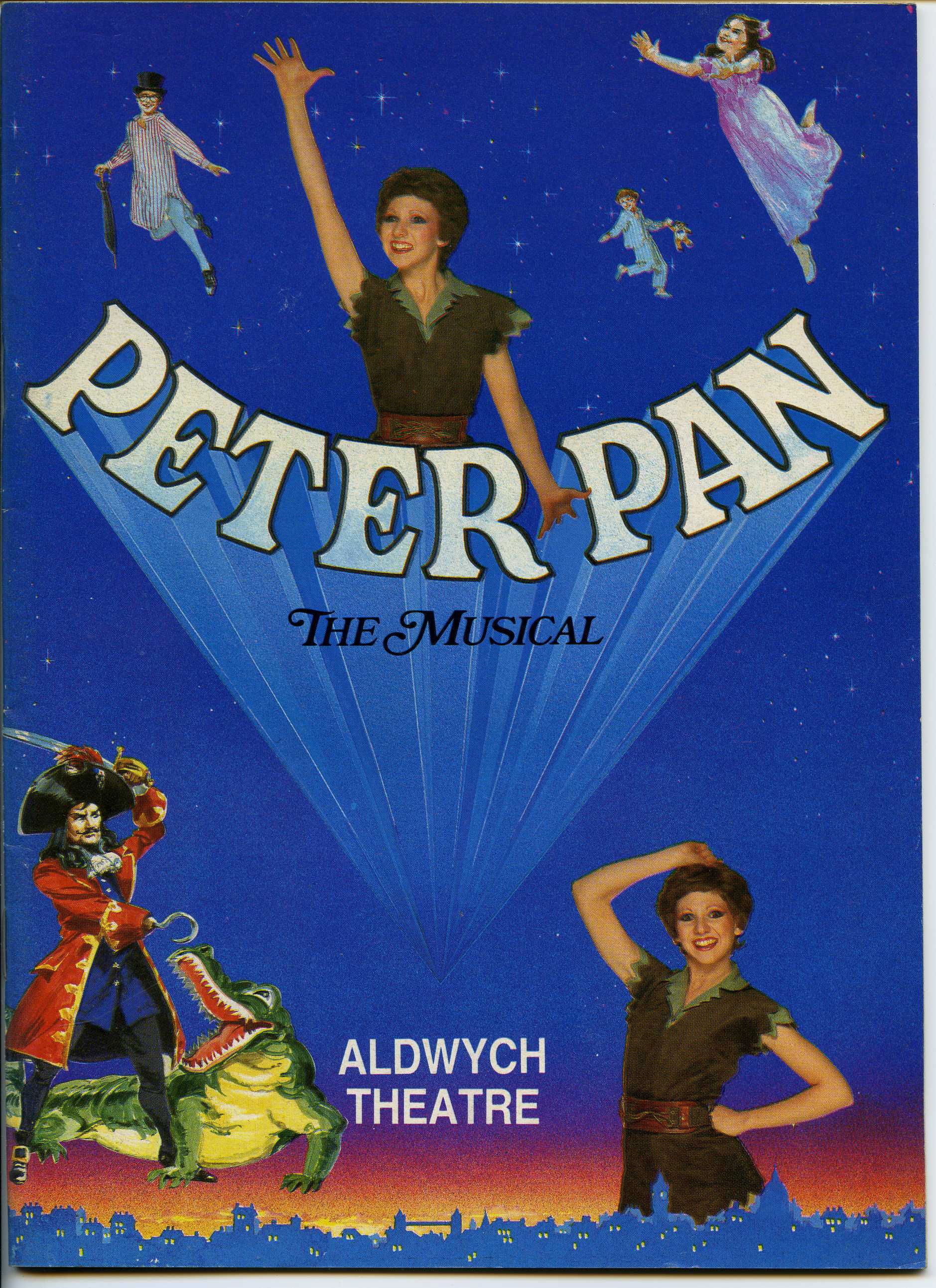 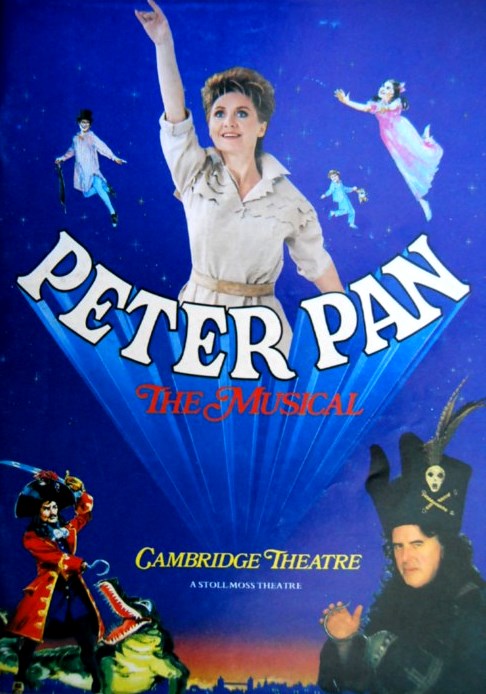