The musical Little Me is based on the novel by Patrick Dennis titled Little Me: The Intimate Memoirs of that Great Star of Stage, Screen and Television/Belle Poitrine, an illustrated autobiography of an imaginary diva (published in 1961). In his memoir, Rewrites:A Memoir, Neil Simon wrote that aside from tailoring the musical's book to the talents of Sid Caesar, the second attraction of the project was a chance to work with choreographer Bob Fosse. "With the exception of Jerome Robbins, for my money Fosse was the best choreographer who ever worked in the theater." (Simon and Caesar had worked together on the television variety program "Your Show of Shows.")

Little Me opened on Broadway at the Lunt-Fontanne Theatre on November 17, 1962 and closed on June 27, 1963, running for 257 performances. Directed by Cy Feuer and Bob Fosse with choreography by Fosse, Sid Caesar starred playing multiple roles, with Virginia Martin as Young Belle and Nancy Andrews as Old Belle.
The London production opened at the Cambridge Theatre on November 18, 1964 and ran for 334 performances. Bruce Forsyth and Eileen Gourlay starred.
The 1982 revival at the Eugene O'Neill Theatre opened on January 21, 1982 and closed on February 21, 1982 after 30 previews and 36 performances. The multiple Caesar roles were split between Victor Garber and James Coco. The director was Robert Drivas and choreographer was Peter Gennaro, with Mary Gordon Murray as Belle; Bebe Neuwirth was in the ensemble.
Little Me was revived on the West End at the Prince of Wales Theatre, opening on May 30, 1984 and running for 334 performances. Russ Abbot and Sheila White starred.
Little Me was revived on Broadway by the Roundabout Theatre Company at the Criterion Center Stage Right as a vehicle for Martin Short, opening on November 12, 1998 and closing on February 7, 1999 after 99 performances and 43 previews. With direction and choreography by Rob Marshall, Faith Prince played the combined roles of Old and Young Belle. According to Rob Marshall: "Without Marty, we wouldn't do it. And we're fortunate that we still have Neil and Cy with us, and they'll be working with us and tailoring it for Marty."
The next professional revival of Little Me is scheduled to take place at the Rose and Crown Theatre, London from the 13th - 31st August 2013. Directed by Brendan Matthew, with choreography by Chris Whittaker and designed by Stuart Charlesworth

1982 Revival
Act I
• Don't Ask A Lady - Belle
• The Other Side of the Tracks — Belle
• The Rich Kids' Rag — Company
• I Love You — Noble Eggleston, Belle, and Company
• The Other Side of the Tracks (Reprise) — Belle
• Deep Down Inside — Pinchley Junior, Belle and Company
• Boom-Boom — Val du Val
• I've Got Your Number — Frankie Polo
• Real Live Girl — Fred Poitrine
• Real Live Girl (Reprise) — The Doughboys
Act II
• I Love You (Reprise) — Belle and Noble
• I Wanna Be Yours — Mr. Worst and Belle
• Little Me — Belle and Mama
• Goodbye — Prince Cherney, Yulnick, Doctor and Loyal Subjects
• Here's to Us — Belle and Company
• Finale — Noble Eggleston and Miss Poitrine, Today

NOTE: The parts of Noble, Mr. Pinchley, Val du Val, Fred Poitrine, Otto Schitzler and Prince Cherney are almost always played by the same actor, from Sid Caesar's days to today. Martin Short added the role of Benny Buchsbaum to this list. An occasional summer stock production has gone the extra mile, doubling Patrick Dennis and George Musgrove as well, but none of these doublings are essential or considered canon. 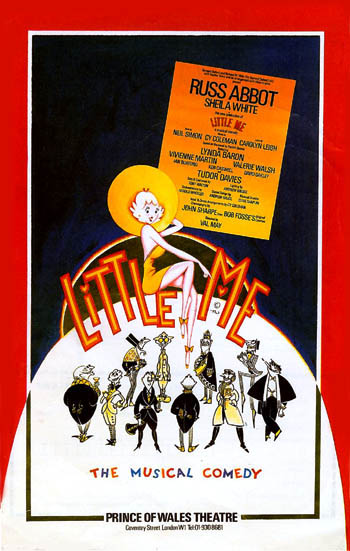