Joe Wellington is determined to break out of Harlem and make it as a boxer. Despite the disapproval of his family, he hooks up with a manager and after a string of losses, things start to go his way... but as he starts to win in the ring, life outside starts to spiral out of control.

With Eddie Satin, the best manager there is, showing an interest in Joe, the woman of his dreams slipping out of reach and his toughest opponent yet lined up in the ring, the stage is set for the fight of his life.

Following the Detroit tryout, Odets died and Gibson was hired to rework the script. The ideals of the noble plot were abandoned in a revision in which Joe evolved into an angry man who, embittered by the constant prejudice he faces, uses his fists to fight his frustrations. His brother became a worker for CORE, and the subtle romance between Joe and the white Lorna developed into an explicit affair capped by a kiss that shocked audiences already having difficulty adjusting to a heavily urban jazz score and mentions of Malcolm X. This was a far cry from the comedies Hello, Dolly! and Funny Girl, both popular holdovers from the previous theatrical season.

After twenty-five previews, the Broadway production, directed by Arthur Penn and choreographed by Donald McKayle, opened on October 20, 1964 at the Majestic Theatre, where it ran for 568 performances. In addition to Davis, the cast included Billy Daniels as Eddie Satin, Kenneth Tobey as Tom Moody, Jaimie Rogers as Lopez and Paula Wayne as Lorna Moon, with Johnny Brown, Lola Falana, Louis Gossett,Al Kirk, Baayork Lee, and Theresa Merritt in supporting roles.

An original cast recording was released by Capitol Records. One song from the score, "This Is the Life", later became a hit in a cover version recorded by Matt Monro.

Davis reprised his role for the 1968 West End production at the London Palladium, the first book musical ever to play in the theatre.

Act II
Golden Boy
While the City Sleeps
Colorful
I Want to Be with You
Can't You See It?
No More
The Fight 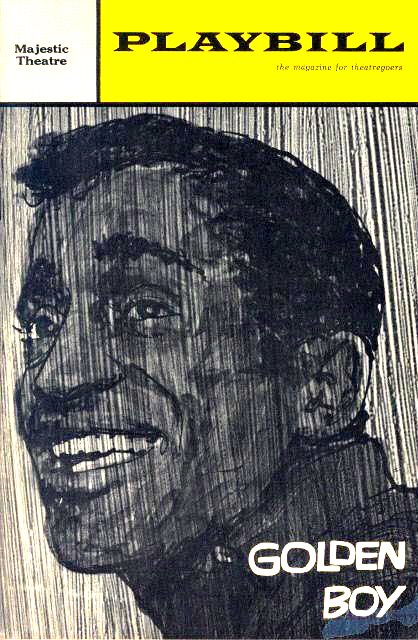 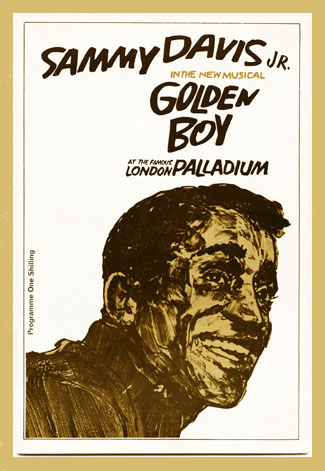 Type de série: Original London
Théâtre: Palladium Theatre (Londres - Angleterre) Durée : Nombre : 118 représentationsPremière Preview : mardi 04 juin 1968Première : mardi 04 juin 1968Dernière : InconnuMise en scène : Arthur Penn • Chorégraphie : Donald McKayle • Producteur : Avec : Sammy Davis, Jr. (Joe Wellington), Gloria De Haven (Lorna Moon), Lola Falana (Lola), Louis Basile, John Bassette, Tony Catanzaro, Mark Dawson, Altovise Gore, Hilda Haynes, Al KirkCommentaires : 'Golden Boy' was the first proper full musical to ever play the London Palladium.
It only played a short season with Sammy Davis Jnr repeating his New York performance.
The show had many problems prior to opening, the main one being Mr Davis wanted his own musicians in the pit and the British MU fought it but gave in when Mr Davis made his way to the airport and back to the states!
It opened on June 4th 1968,attracted small audiences and closed after just 11 weeks, 118 performances, and the Palladium went back to presenting what it was famous for, big name variety stars!