The setting is the American Revolution-era "forests of Manhattan," at that point a burg far overshadowed by Philadelphia and the like. Menfolk are away fighting the Brits; Mrs. Robert Murray (Lois Saunders) leads the homefront sewing circle, but her younger, more hormonally oriented charges can't hardly stitch for thinking about those absent boys, boys, boys. It's mixed good fortune, then, that a group of British officers turns up to commandeer the house as its temporary headquarters. "Hooray! We're gonna be compromised," the girls enthuse. At first "beating a maidenly retreat," they all learn to flirt for freedom's sake when it turns out Yankee generals Washington and Putnam need the redcoats detained overnight so rebel forces can secretly gather. This subterfuge creates a wee dilemma for Mrs. Murray's niece, Betsy , who wants the colonies freed almost as much as she wants wooing from "enemy" Sir John Copeland .

While this first collaboration of Rodgers and Hart basically conforms to the operetta style of the day, the score offers a hint of the sophistication the team would exhibit in their later joint efforts.

Hart got the idea for the musical from a plaque in Manhattan about Murray. He, Rodgers and Fields first took their musical to Fields' father, Lew Fields, to produce, but he declined, thinking the Revolutionary War story would not be commercial. At the time, Rodgers and Hart were unknown young songwriters, but in May 1925, they wrote songs for a charity revue, The Garrick Gaieties, which became a surprise success, and their songs were a hit. Ultimately George Ford, husband of Helen Ford, a star of the show, agreed to produce it. The musical had been variously described as an operetta and a genuine comic opera in the press. Ford presented a tryout of the musical, titled Dear Enemy at the Ohio Colonial Theatre in July 1925. After rewrites, it played for a week in Baltimore in early September 1925.

The musical was seen in 1976 at the Goodspeed Opera House, as an American bicentennial production, and in 1996 at 42nd Street Moon in San Francisco. It was given an on-book concert in 1999 by the Musicals Tonight! troupe with piano accompaniment. In 2002, for the Richard Rodgers centennial, New York's amateur Village Light Opera Group (VLOG) produced the show conducted by Ron Noll with an orchestration reconstructed by Larry Moore.

A television musical special featuring Cyril Ritchard, Anne Jeffreys, Robert Sterling, and Cornelia Otis Skinner as Mrs. Murray, in an adaptation by Neil Simon, was broadcast on November 26, 1955, and the soundtrack is still available. A cast recording of that broadcast was released on compact disc in 1997. In 2013, New World Records released a recording of the complete score in the Moore reconstruction. The recording features the Orchestra of Ireland, conducted by David Brophy, and Kim Criswell as Mrs. Murray. According to Steven Suskin, writing in Playbill, it "couldn't be bettered".

Act I
Heigh-Ho, Lackaday!
War is War
I Beg Your Pardon
Cheerio
Full Blown Roses
The Hermits
Here in My Arms
Tho' We've No Authentic Reason 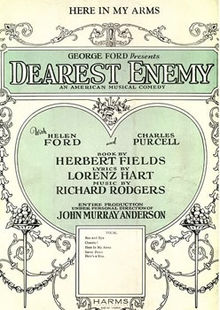 Historian Stanley Green wrote that there was a "well-sustained attempt" to match the music to the plot and period. The ballads were "dainty, charming pieces."

The Telegram reviewer wrote that "We have a glimmering notion that someday they will form the American counterpart of the once great triumvirate of Bolton, Wodehouse, and Kern." 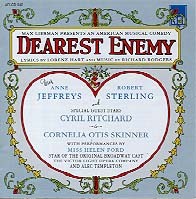 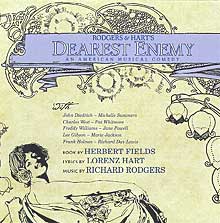