«Darling of the Day»

In spite of a score still admired by many critics, the show's pre-Broadway run was plagued by difficulties, with three directors and five librettists attempting to resolve perceived problems.

The musical finally reached New York City where, following three previews, it opened on January 27, 1968 at the George Abbott Theatre and closed after only 31 performances. Choreography was by Lee Theodore, staging by Noel Willman, scenic design by Oliver Smith, costumes by Raoul Pene Du Bois, and lighting by Peggy Clark. Johnson, upset with all the changes, demanded his name be removed from the credits. The musical starred Vincent Price (in his first and only Broadway musical) as Priam Farll and Patricia Routledge as Alice Challice. Also featured were Brenda Forbes and Peter Woodthorpe. Routledge won the 1968 Tony Award for Best Actress in a Musical. Reviews were mixed. The show was Price's first singing role since the 1940 film The House of Seven Gables. Price had once been a member of the Yale Glee Club and proved to have an adequate singing voice. Harburg and Styne considered the piece their best work.

An original cast recording was released by RCA Victor.

Attempts at major revival have made little headway, although there have been several staged concerts and one fully staged revised version. 42nd Street Moon in San Francisco, California, presented the musical as a staged concert in 1994. The York Theatre Company, in New York, presented the musical in two staged concerts, in 1998 and 2005. Their 2005 concert starred Beth Fowler, Rebecca Luker, Simon Jones and Stephen Mo Hanan. Light Opera Works, in Evanston, Illinois, presented a fully staged version in 2005 revised by Erik Haagensen based on his earlier work for the York Theatre Company concerts. This was the first complete staged production since the musical closed on Broadway.

In 2010, the London Discovering Lost Musicals series presented the show in concert at the Oondatje Wing Theatre - National Portrait Gallery, starring Nicholas Jones as Priam and Louise Gold as Alice.

Act I
Mad For Art
He's A Genius
To Get Out Of This World Alive
It's Enough To Make A Lady Fall In Love
A Gentleman's Gentleman
Double Soliloquy
Let's See What Happens
Panache
I've Got A Rainbow Working For Me
Money, Money, Money
That Something Extra Special 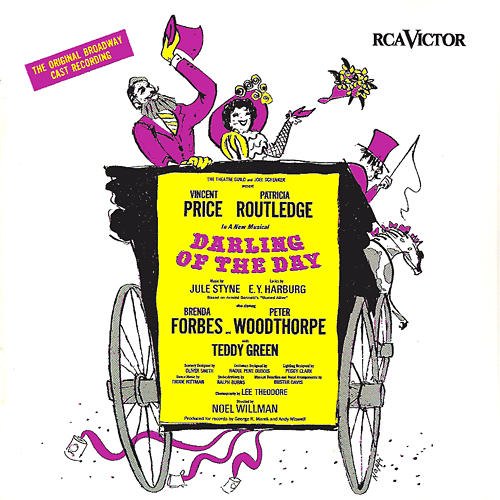