The story of the adventures of Chitty, the magical car as it sails the seas and flies through the air . Chitty's eccentric inventor, Caractacus Potts and his enchanting children Jemima and Jeremy, join the truly scrumptious Truly Scrumptious and batty Grandpa Potts to outwit the dastardly Baron and the evil Child Catcher .

Chitty Chitty Bang Bang: The Magical Car is a children's book written by Ian Fleming (creator of James Bond) for his son Caspar, with illustrations by John Burningham. It was first published in 1964 by Jonathan Cape in London (in three volumes) and Random House in New York, and later made into a film.
Fleming took his inspiration for the car from a series of aero-engined racing cars built by Count Louis Zborowski in the early 1920s at Higham Park, christened "Chitty Bang Bang". Fleming had known Higham Park as a guest of its later owner, Walter Wigham, chairman of Robert Fleming & Co.

The original United Artists motion picture Chitty Chitty Bang Bang first hit the cinema screens in 1968 and has been a firm family classic ever since. Based on a story by Ian Fleming, the movie began life as a personal dream of James Bond producer, Albert R. “Cubby” Broccoli.
As with all his film projects, “Cubby” Broccoli surrounded himself with the very best British talent available to ensure the success of Chitty, which at the time was publicised as the largest and most expensive musical ever filmed in England.
The director, Ken Hughes, who had also adapted the screenplay with prolific children’s author Roald Dahl, led the British film crew. The Sherman brothers, fresh from major success with the Disney Studios, provided the score and songs, earning an Oscar nomination in the process.
“Cubby” Broccoli’s original plans for the enchanting tale of the magical car always included a possible stage version but not until 2002 and the advance of stage technology could the dream become a reality. The producers of the London stage musical, headed by the Broccoli family. Were confident that the technology existed to fly a tonne and a half of machinery with actors inside, that the musical flew onto the London stage. It opened at the London Palladium) to rave reviews on Tuesday 16th April 2002.
Chitty Chitty Bang Bang) broke every box office record at the famous London theatre. It was the longest running show at the Palladium, beating Oliver! and Joseph and the Amazing Technicolor Dreamcoat. During its three and a half year run, the family musical exceeded £70 million in box office revenue.
The London Palladium) production originally capitalised at £6.2 million and cost approximately one third of a million pounds a week to run in order to pay for the huge cast of actors, children and dogs, not to mention stage management, technicians and musicians.
The Chitty stage car holds the Guinness World Record for being the most expensive prop in the history of British Theatre.
Chitty has at its heart two fundamental human desires….the desire to fly and the desire to protect one’s children, told through a magical journey. It is the story of love and adventure, of good and evil and of a family in search of something missing – all brought together by a fantasmagorical car!

Original London production)
The musical premiered in the West End at the London Palladium on April 16, 2002 with six new songs by the Sherman Brothers who wrote the original Academy Award-nominated title and song score as well. The West End production, directed by Adrian Noble with musical staging and choreography by Gillian Lynne, closed in September 2005. It was the longest running show ever at the London Palladium, taking in over £70 million in its three and a half year run.

Original Broadway production )
The Broadway production opened on April 28, 2005 at the Foxwoods Theatre (then the Hilton Theatre) in New York City, garnering good reviews only for the lavish sets. Ben Brantley in the New York Times noted that the show "naggingly recalls the cold, futurist milieus of movies like 'Modern Times' and 'Metropolis,' in which machines rule the universe" and featured songs that sounded "not unlike what you might hear in sing-along hour in a pre-K class". The production was again directed by Adrian Noble with choreography by Gillian Lynne and starred Raúl Esparza (Caractacus Potts), Erin Dilly (Truly Scrumptious), Philip Bosco (Grandpa Potts), Marc Kudisch (Baron Bomburst), Jan Maxwell (Baroness Bomburst) and Henry Hodges (Jeremy Potts). The Broadway production closed on December 31, 2005 after 34 previews and 285 regular performances, losing its entire financial investment.

NICHOLAS DE JONGH for THE EVENING STANDARD says, "Sheer theatrical magic" And goes on to say, "Chitty Chitty Bang Bang proves itself an ageless pleasure and a pleasure for all ages. "

MICHAEL BILLINGTON for THE GUARDIAN says, "It is the car everyone has come to see, and I can only report that when it becomes airborne and flies over the front stalls there are gasps of astonished delight."

CHARLES SPENCER for THE DAILY TELEGRAPH says, "The audience was purring with pleasure from the moment the band struck up the title tune during the overture."

GEORGINA BROWN for THE MAIL ON SUNDAY says, "Oh dear. I hate to be a wet blanket, but Chitty Chitty Bang Bang is a huge disappointment." 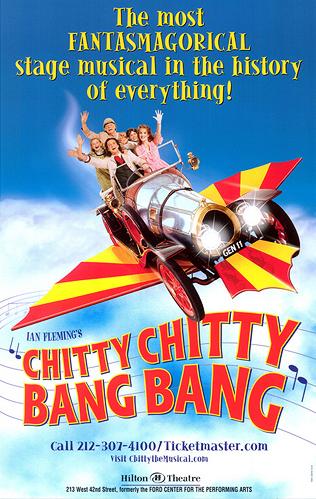 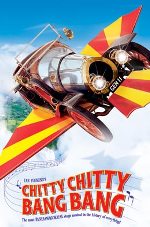 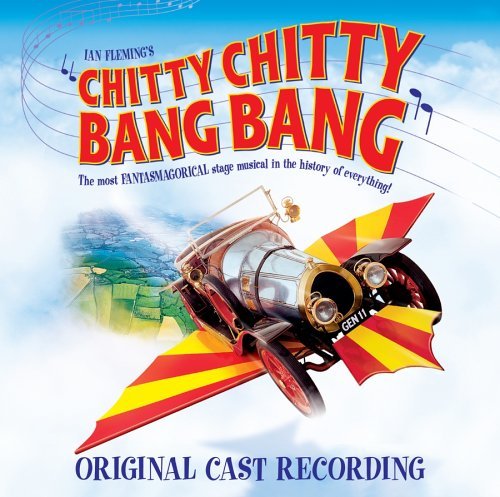