The story was set in the 1870s and told of a young girl named Lucy Veracity Willow who was about to be married to a staid young man, Hon Thomas Trout. She leaves him at the church and elopes with a debonair Frenchman, Pierre Fontaine. The couple travel to France, and are separated due to the effect of the Franco-Prussian War. Finally they find each other and return to England to marry.

Bless the Bride had a friendly reception from critics and public when it opened at the Adelphi Theatre in April 1947, a few nights before Oklahoma!, and stayed for 886 performances. London took its stars, Lizbeth Webb (who had previously taken over a lead in Vivian Ellis and A. P. Herbert's Big Ben) and the handsome Greek Georges Guetary to its heart. Herbert's witty libretto followed the fortunes of Lucy Willow (Webb), engaged to but not in love with Thomas Trout (Brian Reece, who would also appear in their Tough at the Top). When she falls in love with a French actor, Pierre Fontaine, she follows him to France but returns to England when he goes to war. Believing him dead, she agrees again to marry Thomas, but Pierre returns and they are reunited. Herbert craftily highlighted the foibles of the English against the splendour of the French in a very humane work. Ellis's delightful score perfectly captured the feel of Victorian summers and the torments of true love, providing at least four outstanding songs, all of which were taken into the recording studio. When Ellis played his first version of 'Ma Belle Marguerite' to Guetary, the leading man said 'C'est magnifique, mais ce n'est pas Guetary!' 'It soon will be,' replied Ellis. In Guetary's magnificent performance it remains a classic of British musical theatre, as do 'I Was Never Kissed Before' with its enchanting snatch of Webb's spoken dialogue, and that duet so loathed by band-masters 'This Is My Lovely Day'. There is an extraordinary feeling to this lyric and its depressing melody, not surprising in a song that insists 'This is the day I will remember the day I'm dying'. If Ellis and Herbert have one song that will be immortal, 'This Is My Lovely Day' is probably it. The fourth of the numbers recorded in 1947 is Guetary's fine solo 'Table For Two', delivered in a manner that makes most modern leading men seem a poor lot.
For almost half a century, beyond a disappointing studio recording headed by Mary Millar and Roberto Cardinali, this was all the gramophone could offer of Bless the Bride, until a highly distressed recording of a radio broadcast by the Adelphi Theatre's original cast was discovered in America in the early 1990s. The wonders of this recording reveal so much more of the libretto and score, with substantial dialogue and an immediate sense of theatre adding to the occasion. Guetary and Webb give performances here that are as admirable as those on the original recordings, in circumstances that allow their characters to blossom. So much is heard that was unknown, as when Guetary interrupts Webb's ecstatic rendition of 'I Was Never Kissed Before' with a middle section in which he sweeps her off her feet in a long, ringing paean of praise to her and to France: it is an enriching experience. Brian Reece is the most pleasing of second leading men, even if his character is a cad (ultimately reformed). When he refuses Lucy's invitation to play croquet she is lost for words: 'You don't like croquet. But, Thomas, how are we to occupy our leisure for the next fifty years?' At last, we are able to hear Betty Paul as Pierre's jealous friend Suzanne Valois, and it is a thrilling revelation. When she describes the terrible conditions in war-torn France, we know that hers must have been a performance of dignity and power. It provides a very rare opportunity to hear this fine artist. But the delights crowd in on all sides: the enchantment of Ellis's choruses, the Willow sisters discussing the possibilities of 'Any Man But Thomas T.', the stoic performances of Eric Fort and Edna Clement as Lucy's parents, Anona Winn as Nanny singing 'Ducky' (with melancholic wistfulness, and that nursery-like quality so typical of Ellis, recalling his revue song 'Other People's Babies'), and a finale in which the stage action comes alive. The discovery of this material is enough to make the most sceptical believe in miracles, a cause for celebrating the genius of its creators. The sound restoration is beyond praise.

Act II
Bobbing, Bobbing – French maidens
Mon Pauvre Petit Pierre – Suzanne, Lucy and Pierre
The Englishman – Thomas and the family
A Table for Two – Pierre
This is my Lovely Day – Lucy and Pierre
The Fish – The family
To France – Pierre and Chorus
Here's A Kiss – Lucy's sisters
My Big Moment – Thomas 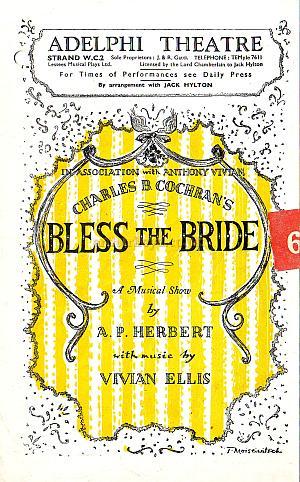