The pickings may be slim, but they give a fair idea of this first collaboration of A. P. Herbert and Vivian Ellis, the first of three to be handsomely produced by the great Charles B. Cochran. It briefly brightened London at the Adelphi Theatre from July 1946. The adventures of a shop girl who gets elected to the House of Commons, Big Ben was described by Ellis as 'a musical election … a light opera. [It] may not have been everyone's dish [and it clearly reflected Herbert's preoccupation as a parliamentarian] but compared with some of today's shows it had quality, as well as being near to very good indeed.' Ellis got the script in October 1945, taking it with him on the train to Margate; by the end of the journey he had the show's principal tunes: 'A huge orchestra played continuously in my head.' There is a sense of that immediacy in its songs, warm-hearted and instantly revealing their charms. The vocal selection was recorded well into the run of 172 performances, by which time both Lizbeth Webb and Noele Gordon had moved into the principal roles they had initially understudied. The team had discovered the nineteen-year old Webb, and were rewarded by a captivating performance of the principal number 'I Want To See The People Happy'; it was a sentiment and melody that seemed exactly to express the first post-war hopefulness that might be in the air. Webb would subsequently make her name in the Ellis-Herbert-Cochran Bless the Bride. On record, Miss Gordon sounds as terrifying as she was on stage towards the end of her life in a short-lived revival of Call Me Madam. The patriotism of Big Ben was not dishonest. Perhaps it was the first time in his career that Ellis had expressed that deep affinity with England that was so essential to his work. 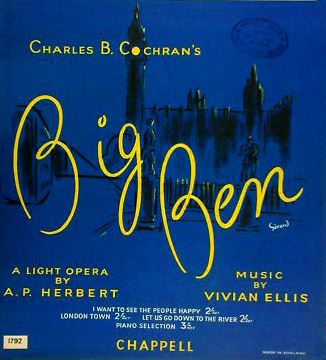