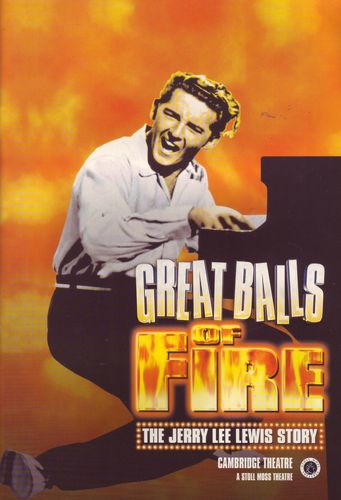 Type de série: Original
Théâtre: Cambridge Theatre (Londres - Angleterre) Durée : 2 mois 1 semaine Nombre : 85 représentationsPremière Preview : Friday 01 October 1999Première : Wednesday 06 October 1999Dernière : Saturday 18 December 1999Mise en scène : Simon Usher • Chorégraphie : Tim Flavin • Producteur : Avec : Billy Geraghty (Jerry Lee Lewis), Neil Henry (Young Jerry), Heather-Jay Jones (Myra), John Bannister, Kim Bretton, Amelda Brown, Eddie Burton, Stuart Callaghan, Simon Fogg, Liam GrundyCommentaires : The life-story of Jerry Lee Lewis could have been an amazing evening in the theatre - two bigamous marriages, wife number three being 13 years old, two sons dying in accidents, being arrested outside Graceland brandishing a gun and demanding to see Elvis, shooting his bass player while blasting holes in his office door - but, no! This was a highly sanitised version of his life: Jerry – criticised for jazzing up hymns at Bible college, then the cliché moment when the hostile record producer suddenly realises the hick lad has got talent, skipping very lightly over the marriages, and then the obligatory rock concert with all the well-known Jerry Lee Lewis hits.
However, this show was saved by an amazing performance from Billy Geraghty as the older Jerry, and audiences loved it (though the critics were not so keen). It ran for nine weeks.Presse : "The curtain went up so late on the opening night of Great Balls Of Fire that the evening threatened to last longer than some of Jerry Lee Lewis's marriages. But this trawl through the turbulent life of one of rock's early superstars, electrifyingly directed by Simon Usher, was worth waiting for. Todd Ristau and Richard Cameron have written a warts-and-all script charting the progress of the man nicknamed The Killer, from poverty to such hits as the title song and Whole Lotta Shakin' Goin' On and the marriages and mayhem beyond. Billy Geraghty's astonishing performance as Jerry Lee is a potential award-winner. Geraghty sings better than the original, plays the piano with equal flamboyance and flair and acts convincingly to involve a rapt audience in the classic poor-boy-makes-good plot... If you love the golden age of rock, do not miss Great Balls Of Fire. It will set your soul ablaze." The News of the World
"Billy Geraghty sets the piano and stage alight as Jerry Lee Lewis in Great Balls of Fire at the Cambridge Theatre. The flames may be fake but the excitement is real when he hits the ivories as the American rock'n'roller they call The Killer... The musical is more than just another excuse for a '50s pop concert. It traces the rise and fall of the boy from the Bible Belt whose private life was as wild as his piano playing... Geraghty has a real ball. He belts out the hits, and in the spectacular finale he bangs the keyboard with his fists, his backside and his feet until it is not only his blond wig that is all shook up - so is the audience. The Killer knocks 'em dead." The Daily Mirror
"They called him the wild man of rock'n'roll. But, judging by this sanitised bio-show about Jerry Lee Lewis, they might equally well have dubbed him Goody Two Shoes. Ending with his reincarnation as a country singer at the Grand Ole Opry in the late 60s, the show has nothing to say about his last three wives, his inadvertent shooting of his bass player or his arrival outside Graceland with a gun demanding to see Elvis. Written by Todd Wm Ristau and Richard Cameron, the show is largely an excuse to get the songs on as quickly as possible... Happily, Lewis is still alive and working, which may explain the show's mincing caution about his private life. But clearly what the audience has come for is the songs rather than the story and for Billy Geraghty's impersonation of the hero. Looking more like Michael Caine than Jerry Lee Lewis, Geraghty certainly works up a storm pounding the piano with fingers, bum and boot and sending stool and lid crashing into the wings... But for all the verve of Neil McArthur's arrangements, there are long passages of tedium between the numbers and you end up learning little about what made Jerry Lee run. The result is a piece of Tussaud-theatre with decibels on." The Guardian