Candide is an operetta with music composed by Leonard Bernstein, based on the novella of the same name by Voltaire. The operetta was first performed in 1956 with a libretto by Lillian Hellman; but since 1974 it has been generally performed with a book by Hugh Wheeler which is more faithful to Voltaire's novel. The primary lyricist was the poet Richard Wilbur. Other contributors to the text were John Latouche, Dorothy Parker, Lillian Hellman, Stephen Sondheim, Leonard Bernstein, John Mauceri, and John Wells. Maurice Peress and Hershy Kay contributed orchestrations. Although unsuccessful at its premiere, Candide has now overcome the unenthusiastic reaction of early audiences and critics and achieved enormous popularity. It is very popular among major music schools as a student show because of the quality of its music and the opportunities it offers to student singers. 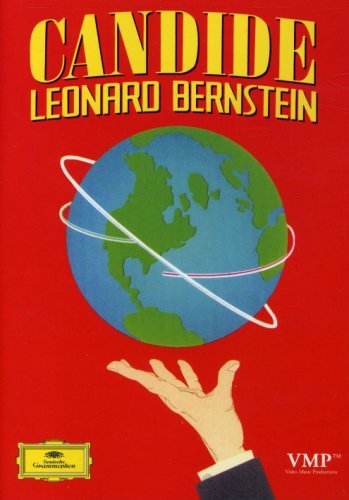 Les origines du musical)
Candide was originally conceived by Lillian Hellman as a play with incidental music in the style of her previous work, The Lark. Bernstein, however, was so excited about this idea that he convinced Hellman to do it as a "comic operetta"; she then wrote the original libretto for the operetta. Many lyricists worked on the show: first James Agee (whose work was ultimately not used), then Dorothy Parker, John Latouche and Richard Wilbur. In addition, the lyrics to "I Am Easily Assimilated" were done by Leonard and Felicia Bernstein, and Hellman wrote the words to "Eldorado". Hershy Kay orchestrated all but the overture, which Bernstein did himself.

Un flop
Candide first opened on Broadway as a musical on December 1, 1956. The premiere production was directed by Tyrone Guthrie and conducted by Samuel Krachmalnick. The sets and costumes were designed by Oliver Smith and Irene Sharaff, respectively. It was choreographed by Anna Sokolow. It featured Robert Rounseville as Candide, Barbara Cook as Cunégonde, Max Adrian as Dr. Pangloss, and Irra Petina as the Old Lady. This production was a box office disaster, running only two months for a total of 73 performances. Hellman's libretto was criticized in a The New York Times review as being too serious: “When Voltaire is ironic and bland, [Hellman] is explicit and vigorous. When he makes lightning, rapier thrusts, she provides body blows. Where he is diabolical, [she] is humanitarian ... the libretto ... seems too serious for the verve and mocking lyricism of Leonard Bernstein's score which, without being strictly 18th century, maintains, with its gay pastiche of past styles and forms, a period quality."
The first London production debuted at the Saville Theatre on Shaftesbury Avenue on 30 April 1959 (after playing for a short time at the New Theatre, Oxford and Manchester's opera house). This production used Lillian Hellman's book with an additional credit 'assisted by Michael Stewart', and it was directed by Robert Lewis with choreography by Jack Cole. The cast included Denis Quilley as Candide, Mary Costa as Cunegonde, Laurence Naismith as Dr. Pangloss and Edith Coates as the Old Lady. It ran for 60 performances.

Des revivals et des réécritures
Without Bernstein's involvement, the show underwent a series of Broadway revivals under the direction of Harold Prince. Lillian Hellman, the author of the original book, refused to let any of her work be used in the revival, so Prince commissioned a new, one-act book from Hugh Wheeler. The sole element of Hellman's book that remained was her invented name for Cunegonde's brother: "Maximilian". The character has no given name in Voltaire's novella. The lyrics were worked on by the team of artists listed above. This 105-minute version, omitting over half of the musical numbers, was known as the "Chelsea version", and opened in 1973 at Robert Kalfin's Chelsea Theater Center in the Brooklyn Academy of Music, before moving to Broadway in 1974 and running there for nearly two years. The 1974 Broadway revival starred Mark Baker (Candide), Maureen Brennan (Cunegonde), Sam Freed (Maximilian), Lewis J. Stadlen (Dr. Pangloss), and June Gable as the Old Lady.
The Chelsea version was marked by a unique production style. Eugene Lee helped Prince make sure that the multi-scene show would not get bogged down in set changes - he created platforms for the action that allowed scenes to change by refocusing attention instead of changing scenery. Actors performed on platforms in front, behind, and sometimes between audience members. Some sat on bleachers, others on stools on the stage floor. As the story unfolded, so did the stage, with sections falling from above, opening, closing, flying apart or coming together. A 13-member orchestra played from four areas. The conductor, who wore period costume and gold braid, could be seen by audience and musicians alike on television monitors.
In response to requests from opera companies for a more legitimate version, the show was expanded on the basis of Wheeler's book. The two-act "opera house version" contains most of Bernstein's music, including some songs that were not orchestrated for the original production. It was first performed by the New York City Opera in 1982 under Prince's direction, and ran for thirty-four performances. Opera companies around the world have performed this version, and the production was a staple of New York City Opera's repertoire.
In 1988, by which point Hellman had died, Bernstein started working alongside John Mauceri, then director of Scottish Opera, to produce a version that expressed his final wishes regarding Candide. Wheeler died before he could work again on the text, and John Wells was engaged. The new show was first produced by Scottish Opera with the credit "Adapted for Scottish Opera by John Wells and John Mauceri". After Bernstein had attended the final rehearsals and the opening in Glasgow, he decided that the time had come for the composer himself to re-examine Candide. Taking the Scottish Opera version as a basis, he made changes in orchestration, shuffled the order of numbers in the second Act, and altered the endings of several numbers. Bernstein then conducted and recorded what he called his "final revised version" with Jerry Hadley as Candide, June Anderson as Cunegonde, Christa Ludwig as the Old Lady, and Adolph Green as Dr. Pangloss. Deutsche Grammophon released a DVD (2006, 147 min.), in 5.0 surround sound, of the 13 December 1989 recording at the London Barbican Centre, with a bonus video prologue and epilogue from the composer and a printed insert "Bernstein and Voltaire" by narrative collaborator Wells explaining what Bernstein wanted in this final revised version.
Ten years later (1999), when the Royal National Theatre in the UK decided to produce Candide, another revision was deemed necessary, and Wheeler's book was rewritten by John Caird. This book stuck far closer to Voltaire's original text than any previous version. The songs remained largely as Bernstein intended, bar a few more tweaks from Sondheim and Wilbur. This, the "RNT version", was a major success and has subsequently been performed a number of times.
Candide was revived on Broadway in 1997, directed again by Harold Prince. The cast included: Jason Danieley (Candide), Harolyn Blackwell (Cunegonde), Jim Dale (Dr. Pangloss), Andrea Martin (Old Lady), and Brent Barrett (Maximilian).
Lonny Price directed a 2004 semi-staged concert production with the New York Philharmonic under conductor Marin Alsop. It ran for four performances, May 5–8, 2004. This production was also broadcast on PBS's Great Performances. The first-night performance was recorded and released as a DVD (2005, 116 min., 5.1 sound). The cast featured Paul Groves as Candide, Kristin Chenoweth as Cunegonde, Sir Thomas Allen as Dr. Pangloss, Patti LuPone as the Old Lady,and Janine LaManna as Paquette, with choruses from both Westminster Choir College and the Juilliard School completing the cast. This production included two rarely sung duets between Cunegonde and the Old Lady, "We Are Women" and "Quiet", which were included in the more extensive Bernstein's 1989 final revised version.
In 2006, in honor of the 50th anniversary of the creation of Candide, the Théâtre du Châtelet in Paris produced a new production under the direction of Robert Carsen. The production was to move to Milan's Teatro alla Scala in 2007 and to the English National Opera in 2008. The production transforms the proscenium into a giant 1950s-era TV set, and has Voltaire, appearing as the narrator, changing channels between certain scenes. Carsen sets the action in a 1950s-1960s world, with an American slant commenting on contemporary world politics. This production was filmed and broadcast on Arte. For an open-house day in French opera houses on February 17, 2007, this video was projected in high definition on a screen filling the proscenium of the Théâtre du Châtelet.

This list is from Bernstein's "final revised version", recorded in 1989.
Acte I
Overture
Westphalia Chorale
Life Is Happiness Indeed
The Best of All Possible Worlds
Universal Good
Oh, Happy We
It Must Be So (Candide's Meditation)
Westphalia
Battle Music
Candide's Lament
Dear Boy
Auto-da-fé (What a day)
Candide Begins His Travels; It Must Be Me (2nd Meditation)
The Paris Waltz
Glitter and Be Gay
You Were Dead, You Know
I Am Easily Assimilated (Old Lady's Tango)
Quartet Finale

Candide (tenor)
Pangloss (baritone; doubles with Martin in the 1956 stage version and Bernstein's 1989 revision. In the Hal Prince versions, he doubles with several other characters, including the narrator Voltaire and the Governor.)
Maximilian (baritone, but can be played by a tenor; is a speaking role in the original 1956 version.)
Cunégonde (soprano)
Paquette (alto in versions of the musical from 1974 on. Although a major character in Voltaire's novella and all revivals of the show, she is a walk-on part with only one line in the 1956 stage version.)
The Old Lady (alto)
Martin (baritone. Doubles with Pangloss in the 1956 version and some later versions. Does not appear in the 1973 version.)
Cacambo (speaking role. Does not appear in the 1956 or 1973 versions. Doubles with Pangloss and Martin in Bernstein's 1989 revisions.) 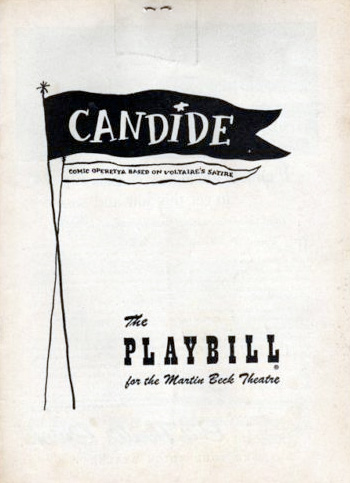 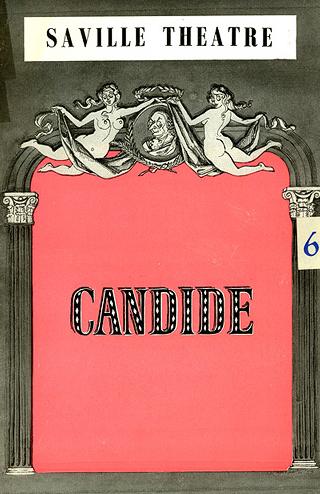 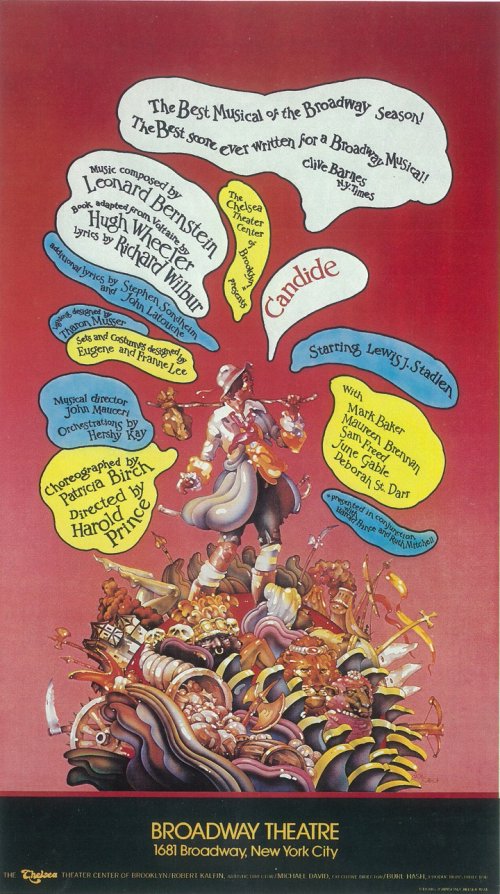 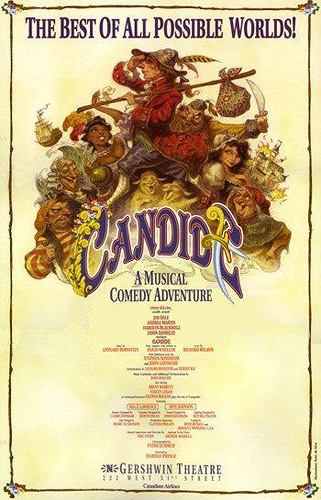 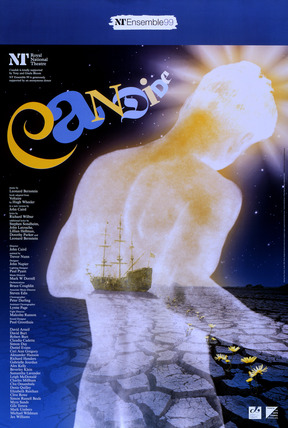 Type de série: Revival
Théâtre: National Theatre (Londres - Angleterre) Salle : Olivier TheatreDurée : 9 mois 2 semaines Nombre : 101 représentationsPremière Preview : mardi 06 avril 1999Première : mardi 13 avril 1999Dernière : mardi 25 janvier 2000Mise en scène : Mark Mark Dorrell Dorrell • Chorégraphie : Producteur : Avec : Simon Russell Beale (Pangloss/Voltaire), Daniel Evans (Candide), Alex Kelly (Cunegonde) , Beverley Klein (Old Woman), Simon Day (Maximilian), Elizabeth Renihan (Paquette), Denis Quilley (Baron), Clive Rowe, David Burt, Alexander Hanson, Myra Sands, Richard HendersCommentaires : New version by John Caird (1999)
Additional lyrics by Stephen Sondheim, John Latouche, Lillian Hellman, Dorothy Parker and Leonard Bernstein
In spite of reservations over a small 14-piece band, and the consequent loss of the orchestral sweep of Bernstein’s score, this production was acclaimed as the very best in a whole succession of attempts to turn this sprawling, biting satire into a workable theatre piece. It had first been staged in the West End forty years earlier, with Denis Quilley in the title role - and he was once more in this revival, though in a different role. It ran until January of the following year.Presse : CHARLES SPENCER of THE DAILY TELEGRAPH loved the show saying, "THIS may not be the best of all possible worlds but during the National's new production of Candide, you often believe you are watching the best of all possible musicals."

ALASTAIR MACAULEY of THE FINANCIL TIMES says, "It has a few faults and blips. Yet all the energies of those involved carry it, entertainingly and touchingly, along its long journey, until it arrives at a rich blend of wisdom and innocence that is as rare in the theatre as it is in life."

JOHN PETER of THE SUNDAY TIMES says, "This is a tremendous production: it is bursting with energy, intelligence, and sheer infectious pleasure of creative spirit."

BENEDICT NIGHTINGALE of THE TIMES says " A pacey, picaresque story needs a narrator, and gets a fine one from Simon Russell Beale, who saunters the stage informing us of devastating evils in cool, incisive style."

However, NICOLAS DE JONGH of THE EVENING STANDARD was more cool about the show, saying "The slant of Caird's distinctly winsome production and the music and songs leave me only medium-warm in appreciation of this fifties cult musical." 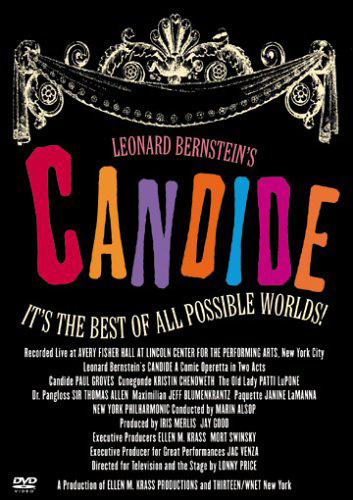 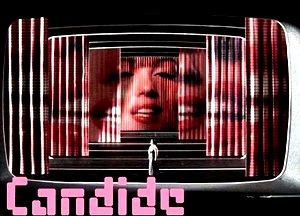 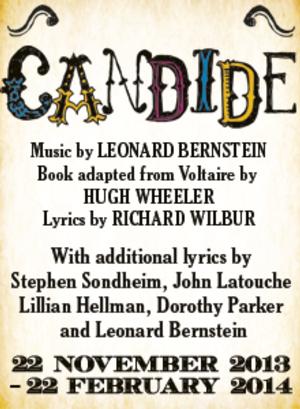 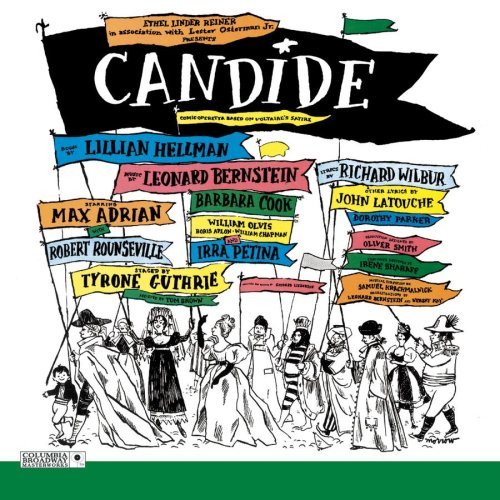 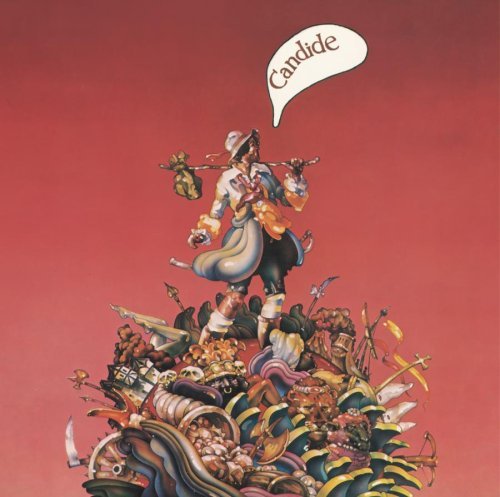 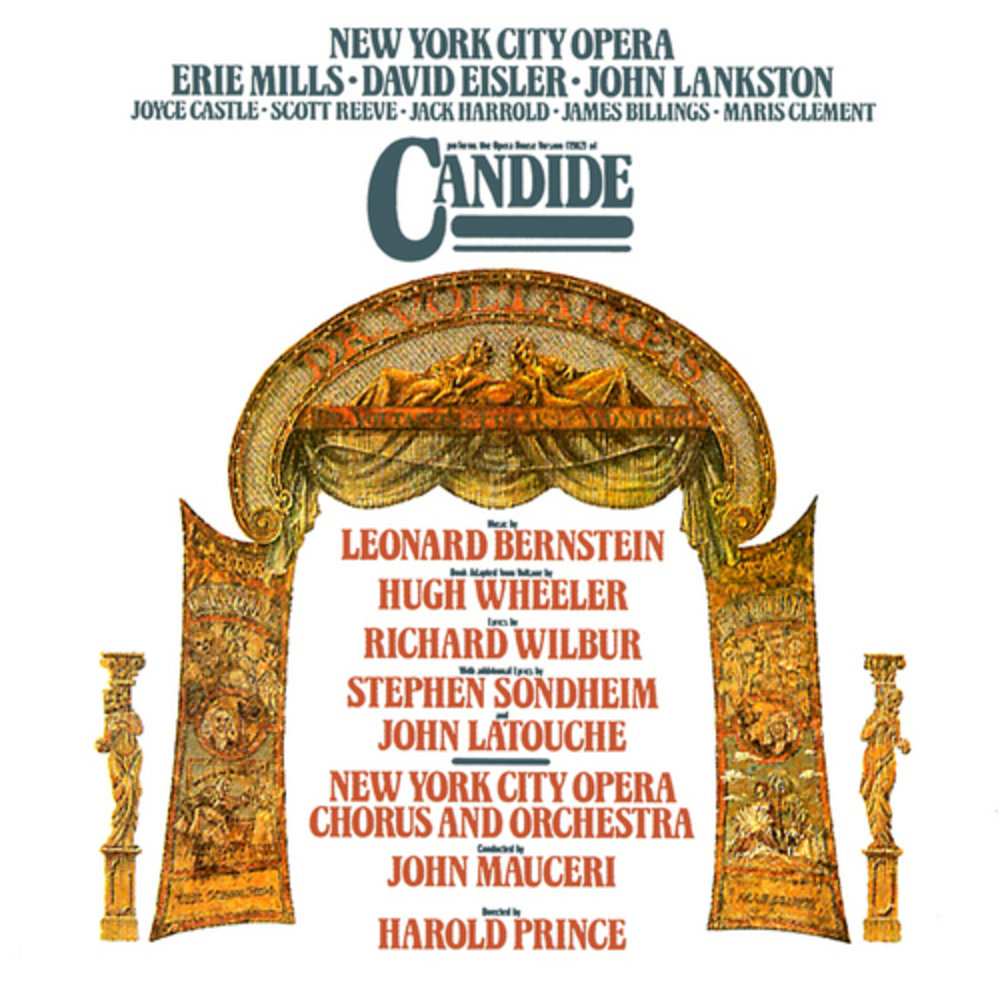