L. Frank Baum decided to collaborate with his friend, composer Paul Ti-etjens, and The Wonderful Wizard of Oz illustrator W. W. Denslow as set and costume designer, to bring the book to the stage. They completed a script, score and designs in 1901, hewing fairly close to the novel. They submitted the package to the manager of the Chicago Grand Opera House, Fred R. Hamlin, who liked it and approached Julian Mitchell to be director.
Mitchell did not like the script, criticizing its lack of spectacle, calling it too subdued and small-scale. However, he sent a wire to Hamlin with the message "Can see possibilities for extravaganza". When Mitchell ac-cepted the project, he brought in new songwriters, cutting some of the original Tietjens numbers. He rewrote the script, together with Glen MacDonough, introducing new characters and incidents, reducing the Cowardly Lion's role, deleting the appearance of the Wicked Witch of the West entirely, and substituting a cow for Toto as Dorothy's com-panion. Baum was anxious about this, but went along. He hoped Mitchell's experience in directing, as well as the casting of comedy team Fred Stone and David C. Montgomery as the Scarecrow and Tin Woodman, would make the show a hit. It turned out to be a roaring suc-cess, with 293 performances. 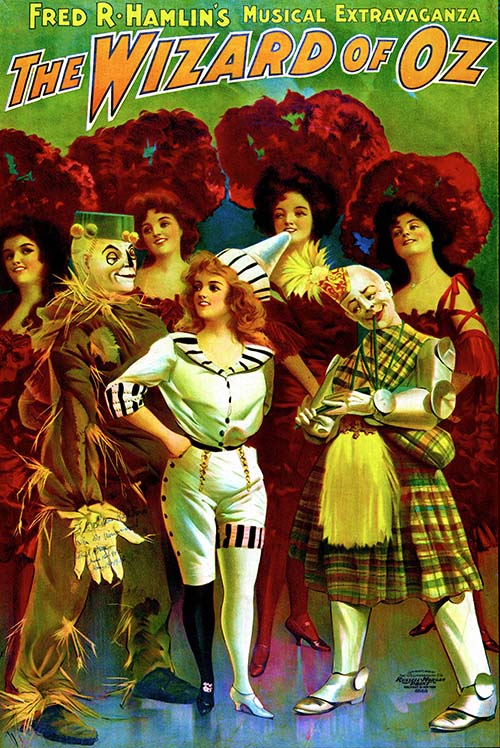