«Too close to the sun»

In the summer of 1961 on the Hemingway ranch in Ketchum, Idaho, Hemingway's young secretary, Louella, is plotting to become his fifth wife and heir to his estate. Rex De Havilland, an old friend of the author and now a struggling Hollywood producer, arrives to secure the film rights to Hemingway's life. Anxious to achieve his goal by any means possible, he tries to convince Hemingway's wife Mary the project will give the ailing writer a new lease on life. Hemingway, however, fails to succumb to the charms of either Louella or Rex, and he banishes both from his home before committing suicide with a shot to his head.

One of the production’s four cast members, Jay Benedict, who was playing Hemingway’s friend Rex, withdrew from the production just before press performance, citing a knee injury.

Based on a play by Ron Read

Too Close to the Sun began previews at the Comedy Theatre in London's West End on 16 July 2009 and officially opened on 24 July. It received uniformly unfavourable reviews and closed on 8 August, bringing its planned eight-week run to an end six weeks early. Directed by Pat Garrett, the opening night cast included James Graeme as Ernest Hemingway, Helen Dallimore as Mary Hemingway, and Tammy Joelle as Louella. Citing a knee injury, Jay Benedict had withdrawn from his role of Rex early in the previews. He was replaced by Christopher Howell who performed all of the remaining performances. Sets and costumes were designed by Christopher Woods.

Act I
"Prologue"
"Just Relax-Think Good Thoughts"
"The Ketchum, Idaho Walk"
"Do I Make A Certain Kind Of Sense?"
"I Do Like To Be Liked"
"Make Yourself One With The Gun"
"Sentimental Small-Towner That I Am"
"Super-Eager Little Her"
"Illusion Lyrique"
"All Will Be Well"
"Hollywood!, Hollywood!"
"Havana"
"Too Close To The Sun"

Act II
"In The World`s Face"
"Alabama - The Queen Of Them All"
"Waiting In The Shadows"
"Just Gimme Half Of Half A Chance"
"Strong And Silent Types"
"Can`t Think Of It Without Wanting To Cry"
"Stormy Weather, Boys"
"Poor Little Silly Young Me"
"Forgive Me Wife. You`ll Understand"
"The Regret"
"I Did My Best"
"Character Gives You The Man"

Aucun dossier informatif complémentaire concernant Too close to the sun

The musical received unanimously unfavourable reviews. Dominic Maxwell of The Times rated it one out of five stars, calling it "pretty dire" and "such a muted, muddled experience, such a waste of time and talent, that there's not really much to snigger about." He described the score as "banal, borrowed and clumsy." Writing for The Guardian, Michael Billington also rated the "implausible and unnecessary musical" one out of five stars and cited "the instantly forgettable two dozen numbers by John Robinson that fatally clog the action." Rhoda Koenig of The Independent similarly rated it one star, writing: "Robinson's trite music pootles about aimlessly and tunelessly, and the lyrics (a Robinson-Trippini collaboration) eschew rhyme as well as reason." In closing, she observed, "Trippini complained some years ago that West End musicals were based on 'formulas which have proved capable of attracting a steady flow of ... customers.' There seems little danger of anyone taking Too Close to the Sun for one of these." Ben Dowell of thelondonpaper commented, "Even literary giant Ernest Hemingway would be hard pressed to summon words damning enough to capture quite how appalling, risible and offensively drab John Robinson's musical – yes musical ... is." Dowell gave it a no-star rating. 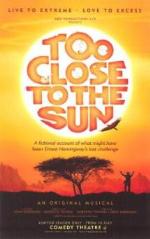 Type de série: Original
Théâtre: Harold Pinter Theatre (Londres - Angleterre)
Durée : 2 semaines Nombre : Première Preview : jeudi 16 juillet 2009Première : vendredi 24 juillet 2009Dernière : samedi 08 août 2009Mise en scène : Pat Garret • Chorégraphie : ???? ???? • Producteur : Avec : Helen Dallimore (Mary), James Graeme (Ernest Hemingway), Christopher Howell (Rex De Havilland) , Tammy Joelle (Louella)Commentaires : the knives were out for this show even before it opened. It was written and produced by John Robinson, who four years earlier had been responsible for “The Man in the Mask”, the biggest flop of the season. During previews, which started on July 16 th , the actor Jay Benedict walked out, and his role was taken over with less than a week’s notice by Christopher Howell. By the time the show had its official opening there were reports of many audience walk-outs, and “Too Close to the Sun” had already been nicknamed “To Close on Sunday”. With nondescript tunes and lyrics that included lines like “My words explode right off the page/With a powerful narrative energy” the show was doomed, and came off on August 8 th , after just two weeks. One critic quipped: “To have written and produced one West End fiasco may be regarded as a misfortune; to have written and produced two, looks like hubris.”Presse : MICHAEL BILLINGTON for THE GUARDIAN says, "Implausible and unnecessary musical...I wouldn't have minded a few tuneful Mediterranean ditties here in place of the instantly forgettable two dozen numbers by John Robinson that fatally clog the action."
DOMINIC MAXWELL for THE TIMES says, "Too Close to the Sun is pretty dire. But it’s such a muted, muddled experience, such a waste of time and talent, that there’s not really much to snigger about...It’s not good; it’s not so bad it’s good. It’s just bewilderingly drab." RHODA KOEING for THE INDEPENDENT says, "Stilted production...Robinson's trite music pootles about aimlessly and tunelessly, and the lyrics (a Robinson-Trippini collaboration) eschew rhyme as well as reason." CHARLES SPENCER for THE DAILY TELEGRAPH says, "Of more than 20 musical numbers, there isn’t one that either delights or lodges itself in the memory...Pat Garrett’s production plods through this rubbish heap of a show with leaden tedium." FIONA MOUNTFORD for THE EVENING STANDARD says, "The dialogue is flat and the music peculiar, with song after identical song coming over all difficult and resolutely tune-free. "