«Songs for a New World»

Story: This show is a cross between a musical and a song cycle, being an abstract musical containing a series of songs all connected by theme rather than narrative. The show features four performers who do not actually play the same characters throughout the show but who do have consistently developing character arcs nonetheless. The composer himself described the show as being . . about one moment. . . .about hitting the wall and having to make a choice, or take a stand, or turn around and go back."

The show sits on the boundary between musical and song cycle, but it is neither; it is an abstract musical, a series of songs all connected by a theme: "the moment of decision." The show employs four performers who do not literally play the same characters throughout the show but who do have consistently developing character arcs nonetheless. Composer Jason Robert Brown has said of his show, "It's about one moment. It's about hitting the wall and having to make a choice, or take a stand, or turn around and go back."

A workshop of the show was produced in Toronto. The original Off-Broadway production ran for a limited three and 1/2-week run, which included two 1/2 weeks of previews at the WPA Theater in 1995. The original cast consisted of Brooks Ashmanskas, Andrea Burns, Jessica Molaskey, and Billy Porter (Porter's part was sung by Ty Taylor on the original cast recording). Daisy Prince, daughter of Broadway director Harold Prince, directed. The original band consisted of Jason Robert Brown on piano, Randy Landau on bass, Tom Partington on drums, Joe Reina on keyboards, and Warren Smith and Rob McEwan on percussion.

The piano features heavily throughout the show's music and because of its small cast and orchestra, Songs for a New World has become a favorite small show for colleges and local theatres, despite its vocally demanding score. The music of Songs for a New World is heavily influenced by a broad range of musical genres, including pop, gospel and jazz. Many of the songs combine elements of two or more of these genres. An extensive background and analysis essay about the show was written by Scott Miller. The Variety reviewer noted :" His debut foray into his own spotlight comes with 'Songs for a New World,' a musical revue that shows Brown to be a capable songwriter of the Alan Menken school: commercial show-tune pop with palatable sentiment and easy-to-take melody.... 'Songs for a New World' seems to contain more cabaret convention and pianobar posing than any one revue should have to withstand."

The first professional revival in New York was staged in October 2008 at the Chernuchin Theatre, featuring a 14-member youth ensemble in addition to the four principal performers; it was directed by Debbie Slevin.

The show continues to be popular among amateur theatre groups with performances across Australia, the USA and the UK. 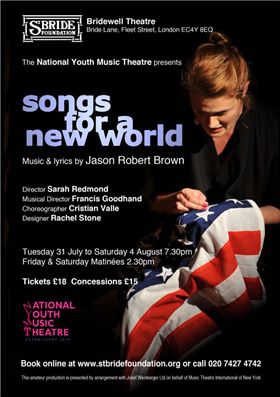