An American in Paris
Home Blues
Broadway, My Street (Lyrics by Sidney Skolsky, music by Jimmy Durante)
(So) I Ups to Him (Music and lyrics by Jimmy Durante)
Follow the Minstrel Band
Liza (All the Clouds'll Roll Away) 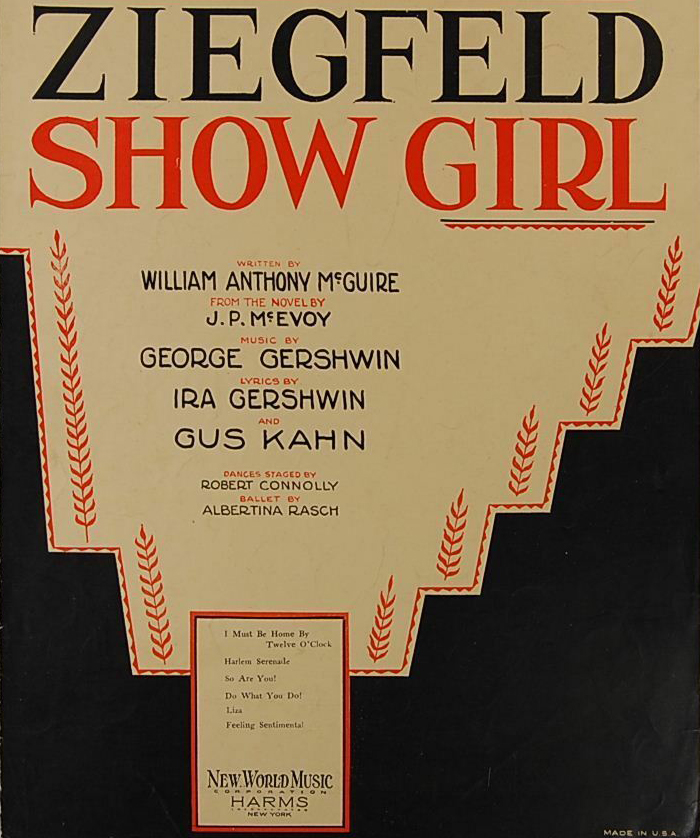 Charles Brackett in the New Yorker found the adaptation “soggily” written, and noted it was Gershwin’s “weakest” score, and Burns Mantle in the Tampa Tribune said the “elaborate and bountifully decorated” show was “the nearest thing” to a financial “miss” that Ziegfeld had produced during the past five years (perhaps he’d forgotten about Betsy).

But Percy Hammond in the Oakland (CA) Tribune said Show Girl was “as satisfactory a musical show as I have ever seen,” and while he noted that Jolson’s “Liza” was a “priceless moment,” it nonetheless “detracted a little” from Keeler’s “brilliant success.” Grace Cutler in the Brooklyn Daily Eagle said that for the “entertaining” show Urban had “outdone himself in scenic effects” and Keeler excelled “in voice, in gesture, [and] routine tap-dancing.” But Gershwin’s music was (with the exception of “Do What You Do!”) a “little disappointing,” Durante was “hampered” by his fellow comics, and Foy “by no means” made the most of his part.

Frederick F. Schrader in the Cincinnati Enquirer said “the most pleasing feature” of the musical was Urban’s décor; otherwise, Gershwin’s score was “breezy” and “sometimes original.” Variety decided the show’s “main trouble” was the “music and the lack of it in a popular way,” but noted Durante got a “peach spot” for two of his specialties, including the “bear” of a song “So I Ups to Him” (the critic reported that the “house rocked” with Durante’s “snapper” line that someone was a “fairy”).

Ward Greene in the Indianapolis Star noted that Whoopee made Keeler famous, “especially when she walked out on the show,” that her marriage to Jolson “hit the front pages of a hundred cities,” and “as a dancer not even Marilyn Miller in her gayest days excels Ruby.” But in regard to Jolson’s “Liza” moment, Greene suspected Jolson might not “continue to give this little surprise party to his darling wife,” who “in time” might “appreciate it less and less.”