Russia's aging Empress, Catherine the Great, makes a grand tour of the Crimea in 1788 arranged by her uncertain lover, Field Marshal Governor General Potemkin. Catherine engages American Revolutionary War naval hero Captain John Paul Jones to lead the Russian fleet in the Black Sea against the Turks. Aware that Catherine is attracted to Scotsman Jones, jealous Potemkin uses all his intrigue and wiles to discredit the former American hero. Nymphomaniac Sura, one of Potemkin's "nieces," makes her own Russian assault on John Paul Jones, getting him drunk and into her boudoir. But Presbyterian Jones' Calvinistic lecturing dissuades sexpot Sura for a brief reformation. Potemkin's fear of becoming just another of the Empress's discarded lovers is, temporarily, calmed and he is reinstated in Catherine's favor.

The Broadway-bound production, directed and choreographed by Bob Fosse, opened on March 11, 1965 at the Fisher Theatre in Detroit. The cast included Alfred Marks, Phyllis Newman, and John McMartin. The musical closed out-of-town and was not produced on Broadway.[2]

The Detroit Press described it as "lesser Loesser," the Detroit Free Press said of it, "It's a Rolls-Royce of a show, a magnificent combination of artful scenery, lively choreography, and engaging people. But there's no gas in the Rolls-Royce tank," and Variety called it "disappointing." Cy Feuer and Abe Burrows were called in to help with revisions,[3]and Fosse was willing to invest his own money in order to get the production to Boston, but after its closing on April 10, Loesser cancelled the rest of the tryout tour and the New York City opening.

The show was revived by the Lyric Stage of Irving, Texas in January 2013.

Ah, To Be Home Again
Barabanchik
Far, Far Away
Hoorah For Jones
I Hear Bells
My Lover Is A Scoundrel
Neither The Time
Pleasures & Palaces
The Sins of Sura
Tears Of Joy
Thunder And Lightning
To Marry
To Your Health
In Your Eyes
Truly Loved 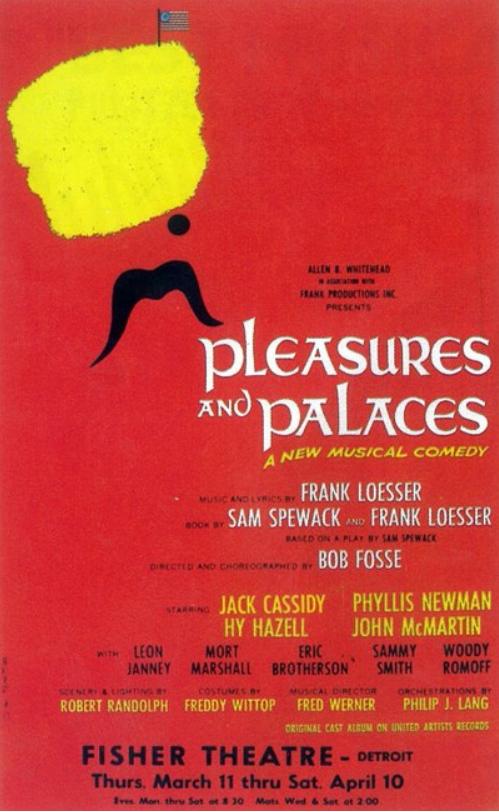