A chronicle of the horrors of the First World War, told through songs and original material from the time. The Master of Ceremonies leads a colourful cast through a series of darkly humourous and often moving scenes with songs including 'Keep the Home Fires Burning', 'It's a Long Way to Tipperary', and 'Goodbye-ee'.

The play originated with Charles Chilton's radio musical The Long Long Trail, composed of World War I songs and named for the popular music hall song "There's A Long Long Trail A-Winding." The piece was a radio documentary that used facts and statistics, juxtaposed with songs of the time, as an ironic critique of the reality of the war.

The musical premiered at the Theatre Royal Stratford East on 19 March 1963; according to Charles Chilton, Joan Littlewood was unconvinced until the show actually opened.[citation needed] The official censor did not grant permission for performance in the West End until Princess Margaret attended a performance and commented to the Lord Chamberlain, Lord Cobbold, that "What you've said here tonight should have been said long ago, don't you agree, Lord Cobbold?"; at this point the transfer was more or less assured despite the objections of the family of Field Marshal Haig. It was an ensemble production featuring members of the theatre's regular company, which included Brian Murphy, Victor Spinetti and Glynn Edwards, all of whom played several roles. The sets were designed by John Bury. The production subsequently transferred to Wyndham's Theatre in June of the same year. The production was a surprise hit, and the musical was adapted by the BBC for radio several times.

The musical premiered in the United States on Broadway at the Broadhurst Theatre on 30 September 1964 and closed on 16 January 1965 after 125 performances. It was seen there by actor and former subaltern Basil Rathbone, who wrote to Charles Chilton that "we were duped, it was a disgusting war".[citation needed] Directed by Littlewood, the cast featured Spinetti and Murphy, plus Barbara Windsor. It received four Tony Award nominations, including Best Musical, and Tony Award for Best Featured Actress in a Musical (for Windsor). Spinetti won the Theatre World Award. 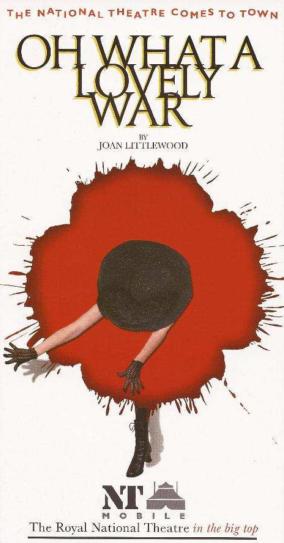 SARAH HEMMING for THE FINANCIAL TIMES says, " A brittle, funny and polished production then, but one that doesn't quite deliver the full emotional impact of this highly charged show."

RHODA KOENIG for THE INDEPENDENT says, "The show's contemporary appositeness has dimmed."

BENEDICT NIGHTINGALE for THE TIMES says, "Call it music-hall with teeth, vaudeville with bite."

MICHAEL BILLINGTON for THE GUARDIAN says, "What makes the show so moving, ... is its ability to catch the texture of ordinary life."

LISA MARTLAND for THE STAGE says, "This is good work and the cast gives its all but along the way the text loses some of its sharpness and the production's pace slows down dramatically."