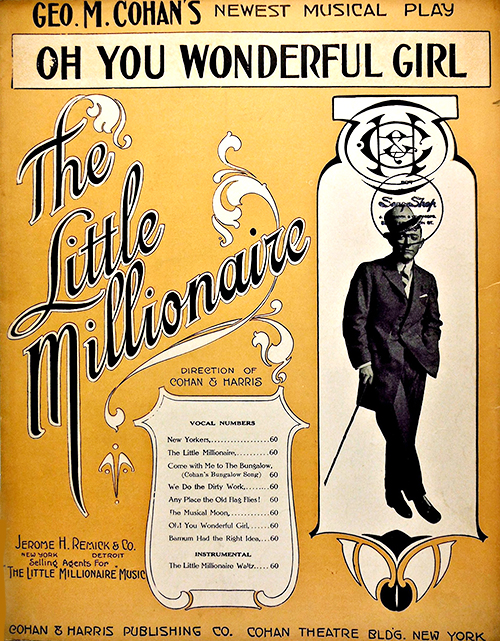 Type de série: Original
Théâtre: George M. Cohan's Theatre (Broadway - Etats-Unis) Durée : 5 mois 2 semaines Nombre : 192 représentationsPremière Preview : lundi 25 septembre 1911Première : lundi 25 septembre 1911Dernière : samedi 09 mars 1912Mise en scène : George M. Cohan • James Corman • Chorégraphie : Producteur : George M. Cohan • Sam H. Harris • Avec : Maud Allen (Miss Primper), Earl Benham (Danny Wheeler), George M. Cohan (Robert Spooner), Helen F. Cohan (Mrs. Prescott), Jerry J. CohanDonald Crisp (Edward Plumber (Rudolph)), William Ford (Starter at the "Beaux Arts"), Sydney Jarvis (Roscoe Handover), Jack Klendon (Reverend H. Henry Dodge), Tom Lewis (Bill Costigan), Amy Mortimer (Mary), George Parsons (George Russell), Julia Ralph (Berdina Busby), Lila Rhodes (Goldie Gray), Dore Rogers (Policeman), Charles W. Weil (Page Boy), Josephine Whittell (Bertha Burnham)Presse : "Again George M. Cohan has dared and won. An inveterate perpetrator of dramatic tricks and surprises, in "The Little Millionaire" he has so far disdained the traditions of musical comedy as to present an entire act without a note of music or without a suggestion of the chorus-the old reliable life saver of so many a piece of its class. He has done more; he has, so far as opportunities go, made not himself but Tom Lewis the star. And what was still more daring, in the new piece he gives the best ballad, a serious love duet, to the two villains of the play. And as served to the audience at the Cohan last evening these startling innovations please, tickled and incited the audience to thunderous applause. No one but George Cohan would have dared these violations of the conventions and doubtless no one but Cohan would have made them acceptable." (Rennold Wolf, The Morning Telegraph)
"The success of such an entertainment as "The Little Millionaire" - and of course its success is no doubt - is due to the fact that Mr. Cohan knows his little book from the first page to the last and, as he might say, then some, maybe." (The New York Times)
"One must concede that George M. Cohan has talent. He has nimble legs, and he writes neat jingles of the popular kind. He also knows how to sing his ditties in a way that sends his numerous followers into ecstasies of admiration. This granted, Mr. Cohan has received about all the credit coming to him. No - we forgot - he is also a specialist in the art of rolling up his eyes and talking through his nose, talents which have earned for him the title "Yankee-doodle Comedian" (whatever that may mean), a distinction shrewdly helped along by the adoption of the United States flag as the trade mark of this particular actor.
All these peculiarities and characteristics have endeared George M. Cohan to his special public. For there is a Cohan public just as there is a John Drew public and a Maude Adams public, only it is not quite so select. The Cohanites are not exacting in their demands. They'll applaud anything, accept anything, so long as it bears the Cohan stamp. Plenty of noise, wild waving of the stars and stripes, a slim comedian full of impudent self-assurance, his eyes half clos ed, hopping about the stage, and they'll yell themselves hoarse. Otherwise, how explain the vogue of "The Little Millionaire," which some enthusiastic scribes have declared the best thing George has ever done? It is not. If Cohan's reputation rested on this piece, he would never have come to own his own theater on Broadway. It is the usual Cohan musical salad, only with a little less dressing than usual. To recount the plot were to waste the reader's time. It is hackneyed nonsense, with scenes thrown together in the crudest manner. The chorus is unattractive, and has little to do. Interest is lacking from the start, and the auditor yawns long before the end is reached. When the star himself holds the center of the stage the piece moves along. A human dynamo of nervous energy, Cohan keeps things hustling in his own characteristic style, but what of it? What does all the fooling, the stereotyped scenes and commonplace dialogue amount to if the play has, so to speak, not a leg to stand upon? The best part in the piece, that of the fat man who stumbles into everybody's way, is capitally acted by Tom Lewis, who has practically all the second act to himself. Lila Rhodes, a graceful and pleasing young lady, is Mr. Cohan's dancing partner." (Theater Magazine - November 1911)