Peace Corps volunteer, hygiene teacher "Sally Hopwinder", is stationed in a fictional nation, "D'hum" with decent living conditions. She concocts a plan to obtain U.S. aid for D'hum by convincing the Pentagon that Russia is about to invade it.

Hot Spot began out-of-town try-outs on February 11, 1963 at the National Theater, Washington, D.C.,[2] and on February 28 at the Shubert Theatre, Philadelphia, Pennsylvania.

The musical premiered on Broadway at the Majestic Theater on April 19, 1963 and closed on May 25, 1963 after 43 performances and 5 previews. (Although reporting 5 "official" previews, according to The New York Times, "the musical expects to run up 36 [previews] at the Majestic by the time it opens".) Scenic and costume design was by Rouben Ter-Arutunian, and lighting design by John Harvey. At least five directors worked on the show: the original director was Morton DaCosta, followed by Martin Charnin, Robert Fryer, Richard Quine, Arthur Laurents, and Herbert Ross. The original choreographer was Onna White. There was no credit given to either director or choreographer, although the New York Times review credits read "staged by Herbert Ross".

Stephen Sondheim, a friend of Rodgers, was brought onto the creative team, resulting in the show's opening and closing number, "Don't Laugh" and the song "That's Good, That's Bad".

The cast starred Judy Holliday and included Conrad Bain, Joe Bova, Joseph Campanella, Mary Louise Wilson, Carmen De Lavallade, and George Furth. This marked Judy Holliday's final stage performance. (She was quoted as saying "You can only live through one or two Hot Spots in your life.")

One of Broadway's most well-known flops, it had 58 "preview" performances, setting a record by cancelling its official opening four times, and then running for only 43 "official" performances. According to Steven Suskin, "it was one of those big-budget, big-advance-sale bonanzas which go wrong and turn into highly public busts." According to the review in Billboard, "Predictions of failure preceeded the show and these were confirmed when the New York Critics Circle passed a unanimous negative judgement." 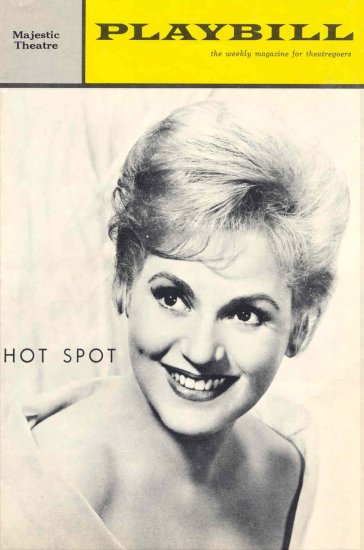 There is some misinformation online about when Broadway previews started for this production and how many there were. The Internet Broadway database lists Broadway previews as having started in April 15, 1963 and having totaled five. In many other places online, it says that there were 58 Broadway previews. (No starting date for them is ever given when that number of performances is listed.) But that is clearly incorrect because there's no question that the second pre-Broadway engagement started on Feb. 28, 1963, at the Shubert in Philadelphia, which was a Thursday. Even if just played there through that weekend, which is unlikely, and then started Broadway previews the following Monday, it could only have played 52 previews. As far as we can tell, it played 36 previews, more than likely starting on March 18, 1963. While we don't have absolute confirmation on this, we do know that in the April 14, 1963, edition of the New York Times, the paper's critic, Howard Taubman, wrote of the many previews it had played — "the musical expects to run up 36 at the Majestic by the time it opens." This would make perfect sense with the then-standard Monday-Saturday Broadway performance schedule if the production had started previews on March 18.