«Hedwig and the Angry Inch»

Hedwig and the Angry Inch is a rock musical about a fictional rock and roll band fronted by a genderqueer East German singer, Hedwig Robinson. The story draws on Mitchell's life as the son of a U.S. Army Major General who once commanded the U.S. sector of occupied West Berlin. The character of Hedwig was inspired by a German divorced U.S. Army wife who was a Mitchell family babysitter and moonlighted as a prostitute at her Junction City, Kansas, trailer park home. The music is steeped in the androgynous 1970s glam rock style of David Bowie (who co-produced the Los Angeles production of the show), as well as the work of John Lennon and early punk performers Lou Reed and Iggy Pop.

Hedwig (who once was a boy named Hansel) lost part of himself to East Berlin when he came to America. Once there, he lost the rest to Tommy Gnosis. The musical is Hedwig's retelling of his life, accompanied by his band "The Angry Inch."

The character of Hedwig was originally a supporting character in the piece. She was loosely inspired by a German female babysitter/prostitute who worked for Mitchell's family when he was a teenager in Junction City, Kansas. The character of Tommy, originally conceived as the main character, was based on Mitchell himself: both were gay, the sons of an army general, deeply Roman Catholic, and fascinated with mythology. Hedwig became the story's protagonist when Trask encouraged Mitchell to showcase their earliest material in 1994 at NYC's drag-punk club Squeezebox, where Trask headed the house band and Mitchell's boyfriend, Jack Steeb, played bass.

They agreed the piece should be developed through band gigs in clubs rather than in a theater setting in order to preserve a rock energy. Mitchell was deeply influenced by Squeezebox's roster of drag performers who performed rock covers. The setlists of Hedwig's first gigs included many covers with lyrics rewritten by Mitchell to tell Hedwig's story: Fleetwood Mac's "Oh Well"; Television's "See No Evil"; Wreckless Eric's "Whole Wide World"; Yoko Ono's "Death of Samantha"; Pere Ubu's "Non-Alignment Pact"; Cher's "Half Breed"; David Bowie's "Boys Keep Swinging"; Mott the Hoople's "All the Young Dudes"; and the Velvet Underground's "Femme Fatale." A German glam rendition of Debby Boone's "You Light Up My Life" once served as the musical's finale.

Mitchell's second gig was as fill-in host at Squeezebox on a bill featuring singer Deborah Harry of Blondie. It was for this occasion that Mike Potter first designed Hedwig's trademark wig, which was initially constructed from toilet paper rolls wrapped with synthetic blond hair. Mitchell, Trask, and the band Cheater (Jack Steeb, Chris Wielding, Dave McKinley, and Scott Bilbrey) continued to workshop material at venues such as Fez Nightclub and Westbeth Theater Center for four years before premiering the completed musical Off-Broadway in 1998.

Mitchell has explained that Hedwig is not a trans woman, but a genderqueer character. "She's more than a woman or a man," he has said. "She's a gender of one and that is accidentally so beautiful."

‡ In the original Off-Broadway production, this song was not sung by Yitzhak, but by the musical director Skszp. However, in the 2014 Broadway Revival, Yitzhak sings the song instead.
§ This song is performed by Tommy Gnosis, who is meant to be portrayed by the same actor as Hedwig.
A song performed by Yitzhak and the band, "Random Number Generation" was included on the Off-Broadway Cast Album, but does not appear in the score. The Broadway production has the song prepared to play in case Hedwig has to leave the stage, along with "Freaks", a song from the movie.[4] Lena Hall performed the song at her final show during the sound check.
In the 2014 Broadway Revival, a small subplot was added to the script, and a small number was added to support it. Parodying The Hurt Locker Hedwig explains that a musical version of the story only ran for a single night before closing during intermission, and that she has convinced a producer to let her perform in what would otherwise be an empty stage. At one point Hedwig finds the theme for a song from the show, "When Love Explodes" and lets Yitzhak sing it, but stops him before he can sing the last note (the one exception being Lena Hall's final night). Yitzhak sings the entire song (including a missing verse) in the Revival Cast Album. 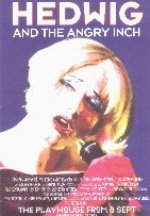 THE TIMES was more luke-war saying, "This off-Broadway cult looks awfully thin in the West End."

THE DAILY TELEGRAPH says, "Though small in scale, and more of a cabaret than a full-blown tune-and-toe show, there is little doubt that Hedwig and the Angry Inch is the best rock musical since The Rocky Horror Show."

THE EVENING STANDARD says, "If only Michael Cerveris, in the role of Hedwig, had the right voice and wit, then this cabaret-musical might have been able to secure the cult status and coterie appeal it achieved off-Broadway. But it turns out to be virtually a one-transexual show and Cerveris's nasal, throaty voice is all too often blotted out by the eloquent, four-strong band that pitches itself too loud."

TIME OUT says 'Hedwig', " suffers from being nowhere near as funny as it has hitherto assumed itself to be."

THE STAGE says, "American Michael Cerveris has great stage presence and a hell of a voice..." 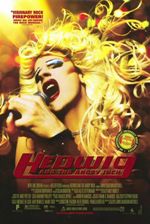 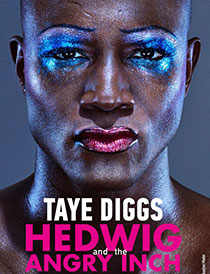 Hedwig and the Angry Inch was first seen Off Off-Broadway at Westbeth, after which it ran at the Jane Street Theatre for over two years from early 1998. The groundbreaking Obie-winning Off-Broadway smash went on to win multiple awards for its cult film adaptation of the same name. This Broadway revival continues the trend, earning eight 2014 Tony Awards nominations and winning four, including Best Revival of a Musical and Best Performance by an Actor in a Leading Role in a Musical for its glittering (literally) star, Neil Patrick Harris.Presse : "Shamelessly enjoyable show. ... one of the few unqualified pleasures of this Broadway spring" Ben Brantley for New York Times

"The success or failure of this 'Hedwig' rests on Harris. In cutoff denim shorts, teetering platforms and gigantic blond hair, he relentlessly prowls the stage, occasionally lunging into the audience for a lap dance or two. But it all feels a little too rehearsed, and Harris doesn’t look entirely comfortable clambering over the bombed-out set. Only when he finally clicks with the material — as on the heartbreaking “Wig in a Box,” about the process of becoming someone else — is the show suddenly worth the effort he’s poured into it." Elisabeth Vincentelli for New York Post

"Its downtown vibe wouldn't seem to make it a candidate for Broadway, but, under the spirited direction of Michael Mayer – and, pivotally, the grand performance by Harris – it's a blast." Robert Feldberg for The Record

"Neil Patrick Harris kicks it out like crazy as Hedwig, the transgender punk rocker who rages away in the musical “Hedwig and the Angry Inch.” Making his first Broadway appearance in ten years, Harris delivers a lusty, full-throttle performance " Michael Sommers for Newsroom Jersey

"Harris is beyond fabulous, holds nothing back and plays it any way but safe in Michael Mayer's exhilarating production." David Rooney for The Hollywood Reporter

"The screaming starts when a bespangled Neil Patrick Harris parachutes onstage in “Hedwig and the Angry Inch” and doesn’t stop until he’s back in his dressing room. That’s the kind of rock-star performance he gives in this spectacular revival." Marilyn Stasio for Variety