The play opens in Shalford's Drapery Emporium where Kipps works and lives as an apprentice draper. Ann, Kipps's childhood sweetheart, is in service so they don't get much chance to see each other. Kipps thinks that a lovers token might help the romance along but the next day brings news that is to change his life. He learns that solicitors are looking for him and consequently gets a little drunk. He is marched off to join his woodwork class run by Helen Walsingham. Kipps falls for her without much hope. Ann is cross with Kipps for not meeting her and walks out on him just before he learns that he has inherited a fortune. Spurred on by his new social standing Kipps proposes to Helen, but her family pressure makes him realise that Ann is his first and real love. Kipps and Ann marry but his yearning to maintain his social standing creates problems between them which are only resolved when a fortune is lost. A small fortune is offered to him ... he rejects it. "What a rum do everything is," he comments.

The show is based on H.G. Wells's novel Kipps: The Story of a Simple Soul.

The show is based on H.G. Wells's novel Kipps: The Story of a Simple Soul. Steele played Arthur Kipps, an orphan who unexpectedly inherits a fortune, and climbs the social ladder before losing everything and realizing that you just can't buy happiness.
David Heneker (who had also worked on Irma La Douce and Charlie Girl) wrote both music and lyrics. Steele's importance to the show was made evident by his appearance in twelve of the musical's fifteen songs. Much of this musical was tailored as a star vehicle for Steele's particular talents which was especially evident in the musical number "Money to Burn": when Arthur Kipps realizes that he is about to become wealthy, he decides that the first thing he will buy is a banjo. This is the cue for someone to hand Tommy Steele a banjo so that he can demonstrate his skill on the instrument. However, in Wells's novel, one of the first things that Arthur Kipps purchases with his newfound wealth is, indeed, a banjo.

London
Half a Sixpence was first produced in London's West End at the Cambridge Theatre on 21 March 1963, with Marti Webb, in her first leading role, playing Ann. The set designer was Loudon Sainthill.

Broadway
The show opened on Broadway in 1965, playing at the Broadhurst Theatre for 511 performances, also starring Steele. John Cleese played the small but crucial role of Walsingham, the stockbroker from a respectable family who embezzles Kipps' fortune. Half a Sixpence was the last West End show to transfer successfully to New York City before the late 1970s and early 1980s musicals of Andrew Lloyd Webber.

Film version
A 1967 film adaptation starring Steele, along with Julia Foster and Cyril Ritchard, was directed by George Sidney and choreographed by Gillian Lynne. Lesley Judd, a future presenter of the BBC children's TV series Blue Peter, was one of the dancing chorus.

Revised Chichester and West End version
A revised version of the show opened at the Chichester Festival Theatre to rave reviews and standing ovations in July 2016, co-produced by Cameron Mackintosh. Reuniting Mackintosh's Mary Poppins collaborators, the show features a new book by Julian Fellowes and new songs by George Stiles and Anthony Drewe alongside revisions of Heneker's originals. The cast included Charlie Stemp as Arthur Kipps, Devon-Elise Johnson as Ann Pornick and Emma Williams as Helen Walsingham.
Following the success in Chichester, the production will transfer to the Noel Coward Theatre in London's West End on 17 November 2016 with previews from 29 October 2016. 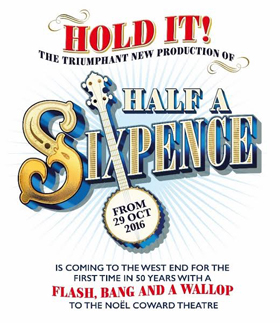 "This is the best version of this musical London has yet seen, oozing with confidence and style in Rachel Kavanaugh’s staging, and brimming over with spick-and-span choreographic delights" Dominic Cavendish for The Telegraph