Imagine a place where the sun is hot, the water's warm and the drinks are as cold as they are plentiful. Welcome to Margaritaville, the island paradise where city folk get away from it all, and the locals get into the kind of trouble you can almost always sweet talk your way out of. Take a break from your troubles, make some new friends at the bar and kick back to the soothing sounds of the kettledrum. It doesn't get much better than this.

The La Jolla Playhouse presented the musical in a limited engagement from May 9 until July 9, 2017. Following its run at La Jolla, the musical had limited runs in New Orleans, Louisiana from October 20 until October 28, Houston, Texas from October 31 until November 5 and in Chicago, Illinois from November 9 until December 2, 2017.

The musical premiered on Broadway at the Marquis Theatre on February 16, 2018, prior to a March 15, 2018 opening, directed by Christopher Ashley and choreographed by Kelly Devine. The musical closed on July 1 of the same year, after 29 previews and 124 regular performances. The musical performed on the PBS "A Capitol Fourth" on July 4, 2018 in Washington, D.C.

Upon closing, Broadway Licensing acquired the rights for stock and amateur performance rights.

A national tour will launch in Providence, Rhode Island in the fall of 2019. 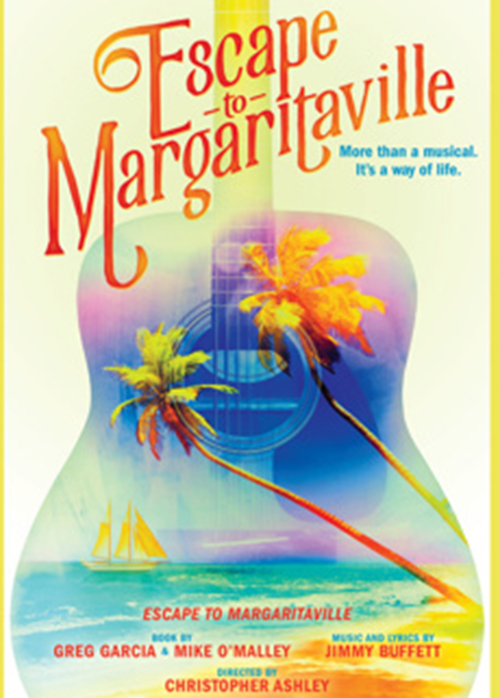 Directed and choreographed respectively by Christopher Ashley and Kelly Devine - the duo that brought you the smash hit musical Come From Away - Escape to Margaritaville features a parrothead's dream playlist of Jimmy Buffett classics such as "Fins," "Why Don't We Get Drunk," "Son of a Son of a Sailor," "Cheeseburger in Paradise," and, of course, "Margaritaville." It also features a scenic design by Walt Spangler that is as luxuriously tropical as it is functional. Indeed, the Marquis Theatre has been transformed into a paradise island getaway, complete with cabanas, margarita machines and bouncing beach balls, that feels like a summer vacation no matter what time of year you decide to visit.

Buffett's hits have been woven unashamedly into a book by Greg Garcia and Mike O'Malley that follows the pursuits of Tully and Rachel, two individuals mismatched by attitudes and ideologies, whose shared attraction is destined to overcome life's many obstacles. He is a singer/bartender at the Hotel Margaritaville, enjoying the easy life and staying clear of the fast lane (and relationship commitments). She is an environmental scientist, who can't survive without a wi-fi connection, and strives to save the world. Escape to Margaritaville explores how two characters from two different worlds can evolve and find comprimises on a search for true happiness - a search they both didn't necessarily realise they were undertaking.

Aside from our two protagonists, there is a wealth of comic relief spilling from the stage in the form of two subplot love stories, as Tammy, an underappreciated and body-shamed bride-to-be, meets Brick, an unassuming and simple guy, who loves her just the way she is, and as Marley, manager of the Hotel Margaritaville, finally gives in to the advances of the often drunken, seaplane pilot J.D. (albeit whilst she fantasizes he is actually Denzel Washington).

If you are in the mood for some piña colada-infused light-hearted entertainment, where sing-alongs are actively encouraged, then book an escape to Maragaritaville today...

Cheeseburger in Paradise, anyone???Presse : "If you’re not drunk or a Parrothead, as Mr. Buffett's fans are called, you’re in trouble." Jesse Green for New York Times

"Of course Jimmy Buffett’s new Broadway jukebox musical “Escape to Margaritaville” comes with a lost shaker of salt. But what’s with the sparkly zombie kickline, fat-shaming fiancé and so-called super potato that can power appliances? Somebody’s had too many margaritas. But so it goes in this musical that may fit the bill if you’re in the mood for a breezy but dopey diversion. A few pre-theater margaritas may enhance things." Joe Dziemianowicz for New York Daily News

"Along with more than two dozen songs from Buffett’s tropical-burnout catalog, the show offers steel drums, jean shorts, palm trees and dancers dressed as fluffy white clouds. It’s often hokey and sometimes pokey. But I’ll level with you: I had fun." Adam Feldman for Time Out New York

"Here's a quick test to determine if you're the target audience for the new musical based on the songs of Jimmy Buffett. If you're immediately able to add the words "and screw" to the song title "Why Don't We Get Drunk" then it's a pretty safe bet you'll enjoy Escape to Margaritaville." Frank Scheck for Hollywood Reporter

"Parrotheads, be warned that there aren’t enough parrots in this show. (Can somebody do something about that?) Otherwise, the hedonistic spirit of Buffett’s feel-good “gulf and western” music is on flamboyant display in this witless but colorful songbook musical custom-tailored for the fans." Marilyn Stasio for Variety