The musical has its origins in an incident that took place during Pasek's high school years. The musical "takes the notion of a teenager, ... Evan Hansen, who invents an important role for himself in a tragedy that he did not earn."

Dear Evan Hansen is a cautionary tale about how a lie can spread across a community before the truth even has its running shoes on. The Evan of the story is an anxiety-ridden high school misfit who is desperate for any form of recognition from his peers. So much so, that when his classmate commits suicide after suffering depression, a mysterious suicide note appears in the weeks after, seemingly addressed to Evan.

Now infamous by association with the dead teen, Evan finally gains the spotlight that he craves. However, with a traumatized local community, not to mention his family, starts begging Evan for more clues about Connor's state of mind, Evan's world starts to unravel with frightening speed. With Connor's parents and sister Zoe (who just happens to be Evan's crush) finding solace in the note, it isn't long before the powers of social media start to question its validity, and Evan's own motives.

Background and development
Dear Evan Hansen is a recipient of an Edgerton Foundation New Play Award. The musical has its origins in an incident that took place during Pasek's high school years. The musical "takes the notion of a teenager, ... Evan Hansen, who invents an important role for himself in a tragedy that he did not earn."

Productions
Dear Evan Hansen premiered at the Arena Stage in Washington, D.C., running from July 10 to August 23, 2015. The musical was directed by Michael Greif with orchestrations by Alex Lacamoire, the set designed by David Korins and the projection design by Peter Nigrini. The cast featured Ben Platt in the title role, a high school senior with social anxiety disorder who finds himself amid the turmoil that follows a classmate's suicide.
The musical opened Off-Broadway at the Second Stage Theater on March 26, 2016 in previews, officially on May 1. The cast featured Ben Platt, Laura Dreyfuss, Mike Faist, Rachel Bay Jones, Will Roland and Jennifer Laura Thompson repeating their roles from the Arena Stage production. New cast members were John Dossett and Kristolyn Lloyd. Michael Greif again directed, with choreography by Danny Mefford. The Off-Broadway engagement closed on May 29, 2016.
The show will premiere on Broadway on November 14, 2016 in previews, officially on December 4. After originally announcing that performances would take place at the Belasco Theatre, in mid-September 2016, producers announced that the show would instead be performed at the Music Box Theatre. Michael Park, who originated the role of Larry in the Arena Stage production, will return for the Broadway production (replacing John Dossett who went on to the musical War Paint). All other cast members from the Second Stage production are returning for the Broadway engagement. Following in the footsteps of writers Benj Pasek and Justin Paul (who are considered to be leaders of the so-called "YouTube Musical Theatre Writers" - that is young writers who use YouTube and other platforms to promote their work), the show is notable for its use of social media. This includes encouraging the spread and cover of songs (ex. "Waving Through a Window" with the hashtag #SongOfSummer), the wide-streaming of multiple songs prior to the Broadway performances, and the use of a "Digital Board of Advisers" which includes the likes of executives at Mashable, Amazon, and the United Talent Agency.

Exploring the angst of modern youth
Teen angst and grief collide in this intelligent take on what it means to be young, in love, an outcast and lonely in modern life. With a book by the award-winning, up and coming young writer Steven Levenson (Masters Of Sex and Wayward Pines), and helmed by the three-time Tony nominee Michael Greif (the man behind the 1996 smash hit Rent and most recently If/Then), Dear Evan Hansen is making its mark as one of the most socially relevant musicals in recent years. 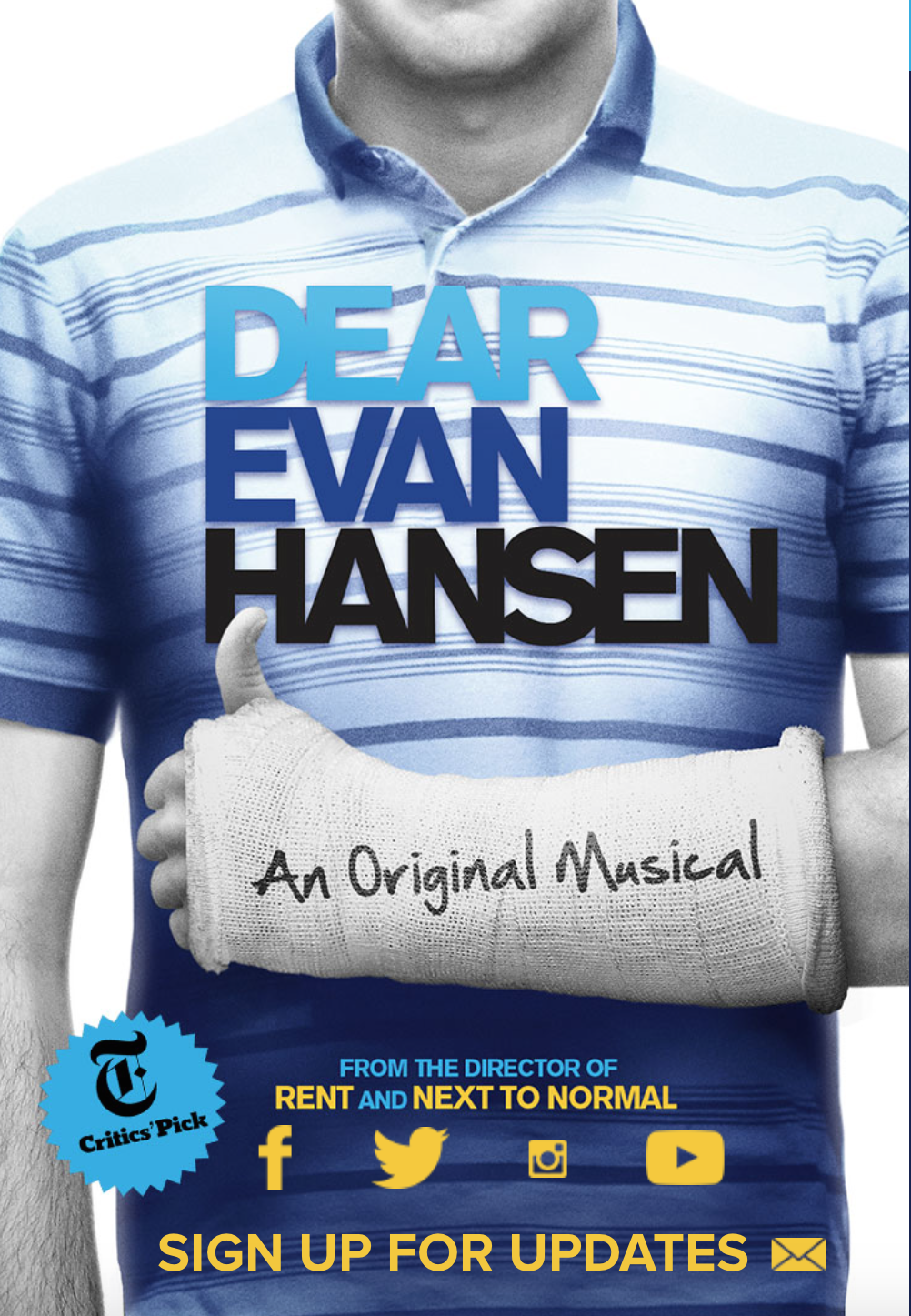 “A 21st century show whose performances and emotions linger long after the final bow.  The entire cast is wonderful!” - Entertainment Weekly

“A stirring, powerful musical with far-reaching appeal.  An anthem for pretty much everyone.” - Daily News 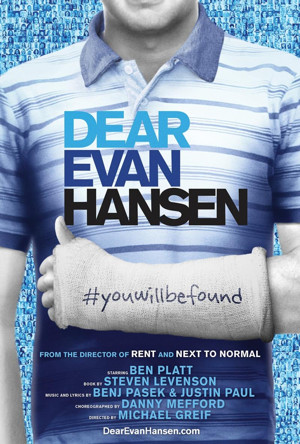 "'Dear Evan Hansen' takes its title from letters Evan writes himself as therapy. The show's so satisyfing it deserves a thank you note." Joe Dziemianowicz for New York Daily News

"Simply put: Platt is giving one of the greatest leading male performances I’ve ever seen in a musical, and the thrillingly modern and moving Dear Evan Hansen is worthy of it." Adam Feldman for Time Out New York

"Then, there’s Platt in a class all to himself, with the impeccable instincts of both a comedian and tragedian while singing his heart and guts out. An incomparable performance that ranks among the finest in years. 'Dear Evan Hansen' may be the story of a nerdy teenager, but it’s that rare show that connects and enlightens all of us." Roma Torre for NY1

"The show was already impressive in its lauded off-Broadway premiere at Second Stage Theatre earlier this year, directed with as much vitality as sensitivity by Michael Greif. But the characterizations now seem even more fully lived-in and the connective tissue among the ensemble — whether playing biological or adoptive family, young lovers or high school acquaintances thrust into an uneasy friendship of convenience — has genuine sparks." David Rooney for Hollywood Reporter

"Through the alchemy of Michael Greif, who directed the original productions at Arena Stage and at Second Stage, Broadway’s Music Box Theater proves a perfect fit for this sensitive musical starring a sensational Ben Platt as a neurotic misfit trying to survive senior year in high school. As for the music and lyrics by Benj Pasek and Justin Paul: Not since “Next to Normal” has a score tapped so deeply into the troubled psyche of its needy protagonist." Marilyn Stasio for Variety 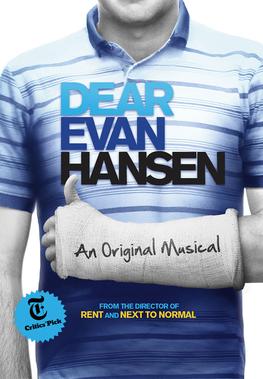 Extrait "Waving through a window"