Carlos and Maria are a married couple on completely opposing sides in the Spanish Civil War. It is
Valentines Day, 1939, and Franco has won. It is also the wedding day of their daughter to Stanley, an English
Republican Brigade volunteer, but while the families gather to celebrate, German bombers prepare to flatten a
republican village, and a guerrilla murders a Falangist fellow-traveller. In all this turmoil the newly-weds with the
bride’s parents prepare to escape by boat to safety in Stanley’s home town, Scarborough.

Howard was inspired to write Days of Hope by the political events occurring in Eastern Europe in the late 1980s, and was interested that the ideas of freedom and democracy would be seen differently through the eyes of a country which was just discovering their meaning. Relating this to his choice of the Spanish Civil War as a setting for his musical, he said, “I felt that that the best way to look at freedom and democracy was to look at it when it was collapsing and failing. A year ago [in 1990] everybody was writing plays about the eruption of freedom and I wanted to go back and ask questions. Why did democracy fail in Spain in 1939? What did we do to invite fascism on ourselves all overEurope?”

DAYS OF HOPE received its first performance on August 14th 1990 at The Newman Rooms in Oxford. It was revised and produced again at Hampstead Theatre in April 1991, subsequently touring England. During its 6-week run at Hampstead, a large group of the surviving International Brigaders saw the show and met its cast. It is not a conventional through-composed musical but a play punctuated by songs. Characters do not sing the songs 'to' other characters but to the audience directly, rather in the manner envisaged by Brecht & Weill.

Can you Hear Us Frederico Garcia Lorca?
Viva la Muerte
Democracy
If Not Today
Market Day 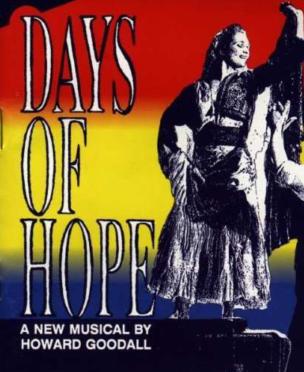