Gay Vienna, before the First World War; the perfect setting for rash, romantic promises. Composer Rudi Kleber, penniless and unknown, befriends the schoolgirl niece of his landlady, and vows to propose to no-one until she is old enough to have first refusal. Operetta star Maria Ziegler recognises his talent, sponsors his first success, and falls madly in love with him. But, foolishly idealistic, he keeps his word to the child until, three dancing years later, little Grete returns from finishing school, a highly attractive young lady. Maria overhears Rudi redeem his promise and, heartbroken, does not stay long enough to hear his profound relief at Grete's refusal. The dancing years come and go. Maria has married Prince Metterling, but when Rudi first meets her young son he has no doubt that the child is his own. The rising threat of Nazism is casting shadows as the story reaches its dramatic close.

Ivoi Novello’s fourth successive and successful production at Drury Lane was forced to close when the outbreak of World War II caused an abrupt drop in attendance. One year later it began an 18-month tour with basically the same cast, except for the replacement of Peter Craves by Barry Sinclair. The musical returned to London on March 14. 1942, at the Adelphi Theatre; its rum of 969 performances made it the most popular musical presented in London during the war, and the termination of its run was due only to the increase in the number of German air raids. (In April 1944 No-
vello was jailed for a month for illegally purchasing petrol; his return to the cast was the occasion for a tumultuous reception.) After the London run. The Dancing Years again toured the provinces with Sinclair succeeding Novello, and Jessica James replacing Mary Ellis. The company played a return engagement in London in March 1947, then resumed its tour. In all, the operetta played almost consecutively for 10 years. In 1968, it was revived at the Saville Theatre, London, with June Bronhill and David Knight.
Although The Dancing Years was in the tradition of bittersweet romances associated with Novello (as in his pievious Perchance to Dream, he again played the part of a composcr), it did aim for a certain topicality by voicing opposition to Nazi dictatorship. The story begins in 1911 at an inn outside Vienna where poor Rudi Kleber and operetta star Maria Ziegler meet and fall in love. Three years later their bliss is shattered when, as a result of a misunderstanding. Maria leaves Rudi to marry Prince Charles. After another 12 years Rudi and Maria meet again, discover they are still in love, but part for the sake of their son, who thinks the prince is his father. In 1938, following the German conquest
of Austria, Rudi is arrested for opposing the new regime but Maria manages to get him released.
Another musical that also dealt with the Nazi invasion of Austria was The Sound of Music (NY 1959).

Dawn Prelude
Uniform
Waltz of My Heart
Wings of Sleep, The
Lorelei
My Life Belongs to You
I Can Give You the Starlight
My Dearest Dear
Chorale and Tyrolese Dance
Primrose
In Praise of Love
Leap Year Waltz, The 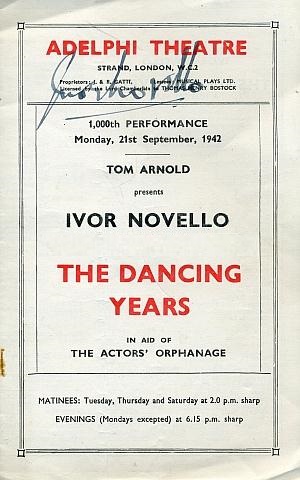