Origin and analysis
The original idea of the opera came from Jonathan Swift, who wrote to Alexander Pope on 30 August 1716 asking "...what think you, of a Newgate pastoral among the thieves and whores there?" Their friend, Gay, decided that it would be a satire rather than a pastoral opera. For his original production in 1728, Gay intended all the songs to be sung without any accompaniment, adding to the shocking and gritty atmosphere of his conception.[7] However, a week or so before the opening night, John Rich, the theatre director, insisted on having Johann Christoph Pepusch, a composer associated with his theatre, write a formal French overture (based on two of the songs in the opera, including a fugue based on Lucy's 3rd act song "I'm Like A Skiff on the Ocean Toss'd") and also to arrange the 69 songs. Although there is no external evidence of who the arranger was, inspection of the original 1729 score, formally published by Dover Books, demonstrates that Pepusch was the arranger.
The work took satiric aim at the passionate interest of the upper classes in Italian opera, and simultaneously set out to lampoon the notable Whig statesman Robert Walpole, and politicians in general, as well as the notorious criminals Jonathan Wild and Jack Sheppard. It also deals with social inequity on a broad scale, primarily through the comparison of low-class thieves and whores with their aristocratic and bourgeois "betters."
Gay used Scottish folk melodies mostly taken from the poet Allan Ramsay's hugely popular collection The Gentle Shepherd (1725) plus two French tunes (including the carol 'Bergers, Ecoutez La Musique!' for his song 'Fill Every Glass'), to serve his hilariously pointed and irreverent texts. The renowned composer, John Christopher Pepusch, composed an Ouverture and arranged all the tunes shortly before the opening night at Lincoln's Inn Fields on 28 January 1728. However, all that remains of Pepusch's score are the Ouverture (with complete instrumentation) and the melodies of the songs with unfigured basses. Various reconstructions have been attempted, and a 1990 reconstruction of the score by American composer Jonathan Dobin has been used in a number of modern productions.
Gay uses the operatic norm of three acts (as opposed to the standard in spoken drama of the time of five acts), and tightly controls the dialogue and plot so that there are surprises in each of the forty-five fast-paced scenes and 69 short songs. The success of the opera was accompanied by a public desire for keepsakes and mementos, ranging from images of Polly on fans and clothing, playing cards and fire-screens, broadsides featuring all the characters, and the rapidly published musical score of the opera.
The play is sometimes seen to be a reactionary call for libertarian values in response to the growing power of the conservative Whig party. It may also have been influenced by the then-popular ideology of Locke that men should be allowed their natural liberties; these democratic strains of thought influenced the populist movements of the time, of which The Beggar's Opera was a part.
The character of Macheath has been considered by critics as both a hero and an anti-hero. Harold Gene Moss, arguing that Macheath is a noble character, has written, "[one] whose drives are toward love and the vital passions, Macheath becomes an almost Christ-like victim of the decadence surrounding him." Contrarily, John Richardson in the peer-reviewed journal Eighteenth-Century Life has argued that Macheath is powerful as a literary figure precisely because he stands against any interpretation, "against expectation and illusion."
The Beggar's Opera has had an influence on all later British stage comedies, especially on nineteenth century British comic opera and the modern musical.

Adaptations
As was typical practice of the time in London, a commemorative "score" of the entire opera was assembled and published quickly. As was common, this consisted of the fully arranged overture followed by the melodies of the 69 songs, supported by only the simplest bass accompaniments. There are no indications of dance music, accompanying instrumental figures or the like, except in three instances: Lucy's "Is Then His Fate Decree'd Sir" – one measure of descending scale marked "Viol." –; Trape's "In the Days of My Youth", in which the "fa la la chorus is written as "viol."; and the final reprieve dance, Macheath's "Thus I Stand Like A Turk", which includes two sections of 16 measures of "dance" marked "viol." (See the 1729 score, formerly published by Dover).
The absence of the original performing parts has allowed many producers and arrangers to have free creative reign. The tradition of personalized arrangements, dating back at least as far as Thomas Arne's later 18th century arrangements, continues today, running the gamut of musical styles from Romantic to Baroque: Austin, Britten, Sargent, Bonynge, Dobin and other conductors have each imbued the songs with a personal stamp, highlighting different aspects of characterization. Following is a list of some of the most highly regarded 20th-century arrangements and settings of the opera.
In 1920, the baritone Frederic Austin newly arranged the music (and also sang the role of Peachum) for the long-running production (1,463 performances) at the Lyric Theatre, Hammersmith. The Irish baritone Frederick Ranalow sang the role of Captain Macheath in every performance. In 1955 this version was recorded by conductor Sir Malcolm Sargent with John Cameron as Macheath and Monica Sinclair as Lucy.
In 1928, on the 200th anniversary of the original production, Bertolt Brecht (words) and Kurt Weill (music) created a popular new musical adaptation of the work in Germany entitled Die Dreigroschenoper (The Threepenny Opera). In this work, the original plot is followed fairly closely (although the time is brought forward over a hundred years) but the music is almost all new.
In 1948, Benjamin Britten created an adaptation with new harmonisations and arrangements of pre-existing tunes. Additional dialogue was written by the producer, Tyrone Guthrie. Peter Pears was the first singer of Macheath.
The opera was made into a film version in 1953, and starred Laurence Olivier as Captain Macheath.
In 1975, Czech playwright (and future president) Václav Havel created a non-musical adaptation.
In 1977, the Nigerian Nobel Prize-winning playwright and dramatist Wole Soyinka wrote, produced and directed Opera Wonyosi (publ. 1981), an adaptation of both John Gay's The Beggar's Opera and Bertolt Brecht's The Threepenny Opera; most of his characters as well as some of the arias are from the two earlier plays.
In 1981 Richard Bonynge and Douglas Gamley arranged a new edition for The Australian Opera (now Opera Australia). It was recorded the same year with Joan Sutherland, Kiri Te Kanawa, James Morris and Angela Lansbury.
The opera was adapted for BBC television in 1983. This production was directed by Jonathan Miller and starred Roger Daltrey in the role of Macheath, Stratford Johns as Peachum, Gary Tibbs as Filch, and Bob Hoskins as the Beggar. The "happy" ending was changed so that Macheath is hanged instead of being reprieved.
In 1984 in the play (and later film) A Chorus of Disapproval by Alan Ayckbourn, an amateur production of The Beggar's Opera is a major plot driver and excerpts are performed.
In 1986 in the Brazilian musical film Ópera do Malandro (American title Malandro), by Ruy Guerra (director) and Chico Buarque (writer and composer).
In 1990, American composer Jonathan Dobin[9][12] created a performing edition for the Ten Ten Players in New York City. The edition contains orchestrations for all 69 songs from the extant skeletal score and fleshes out the choruses, dances and intervening ritornelli in a baroque style. The New York Times wrote, "only a trace of Pepusch's score has survived… the music was reconstructed in a convincing period style by Jonathan Dobin, the ensemble's harpsichordist".
In 1998, the all female Japanese troupe, Takarazuka Revue, produced an adaptation titled Speakeasy. The play was Maya Miki's retirement play.
In 2008 the Sydney Theatre Company of Australia and Out of Joint Theatre Company co-produced a version entitled The Convict's Opera written by Stephen Jeffreys and directed by Max Stafford-Clark. This version is set aboard a convict ship bound for New South Wales, where convicts are putting on a version of The Beggar's Opera. The lives of the convicts partly mirror their characters in The Beggars' Opera, and modern popular songs are performed throughout the piece. 'The Convict's Opera' began touring the UK in early 2009.
Vanishing Point created a modern production of The Beggar's Opera in 2009 for The Royal Lyceum Theatre and Belgrade Theatre, Coventry, set in a near-future apocalypse world. It features music from A Band Called Quinn.
Beginning on 27 November 2010, an adaption of The Beggar's Opera, called "One Wife Too Many" was staged at the Nowra Players in regional New South Wales, Australia.
In July/August 2011 YAP Theatre Company staged a new adaptation of The Beggar's Opera in Swindon and London, UK, with an updated script by Matt Fox and a new musical arrangement by Jessie Thompson.
The original opera was performed in an 18th century setting at the Open Air Theatre, Regent's Park in summer 2011, in a production directed by Lucy Bailey. 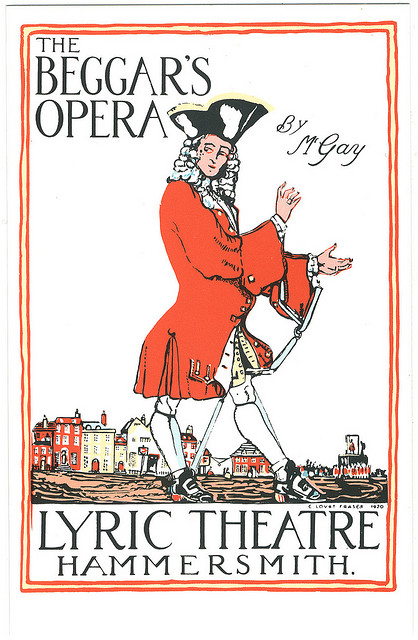 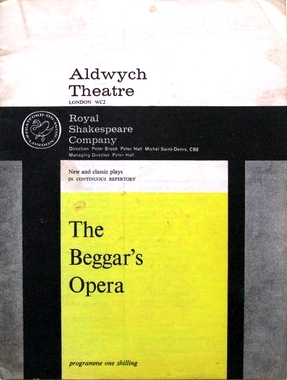 Type de série: Revival
Théâtre: Aldwych Theatre (Londres - Angleterre) Durée : Nombre : 43 représentationsPremière Preview : mardi 16 juillet 1963Première : mardi 16 juillet 1963Dernière : InconnuMise en scène : Peter Wood • Chorégraphie : Pauline Grant • Producteur : Avec : Cast: Ronald Radd (Peachum), Doris Hare (Mrs Peachum), Dorothy Tutin (Polly Peachum), Derek Godfrey (Macheath), Patricia Kilgarriff (Jenny Diver), Virginia McKenna (Lucy Lockitt), Tony Church (Lockitt)Commentaires : A Royal Shakespeare Company production played in repertoire for a limited run of 43 performances. Set on a Thames hulk and performed by a group of convicts awaiting transportation to the West Indies, it was slaughtered by the critics in every respect. It was claimed none of the actors could sing, the production was unbelievably slow and ponderous, Sean Kenny's sets were hideous and unworkable, with some wildly inappropriate additional music written by Raymond Leppard. The Plays and Players critic wrote: “There were times in fact when I began to wish I were watching some relatively fast-moving work like Tristan at Bayreuth instead of this monumental bore that the programme so amusingly describes as a 'comedy by John Gay'”. 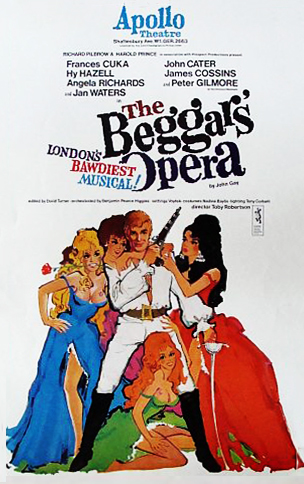 Type de série: Revival
Théâtre: Lyric Hammersmith (Londres - Angleterre) Durée : Nombre : Première Preview : mardi 19 août 1980Première : mardi 19 août 1980Dernière : InconnuMise en scène : Chorégraphie : Producteur : Avec : Brian Protheroe, Fiona Fullerton, Margaret Courtenay, Jane HardyCommentaires : This opened the new season at the Lyric Hammersmith, and was chosen to mark the 60th anniversary of the famous Nigel Playfair production of 1920 - the legendary “Beggar’s Opera” which ran for over three years and made a large profit at a time when the Lyric was facing severe financial problems. Unfortunately this revival did not achieve anything like the same public appeal and according to Ned Sherrin in “Plays & Players” was “much spat upon” by the critics and was “a great embarrassment”. 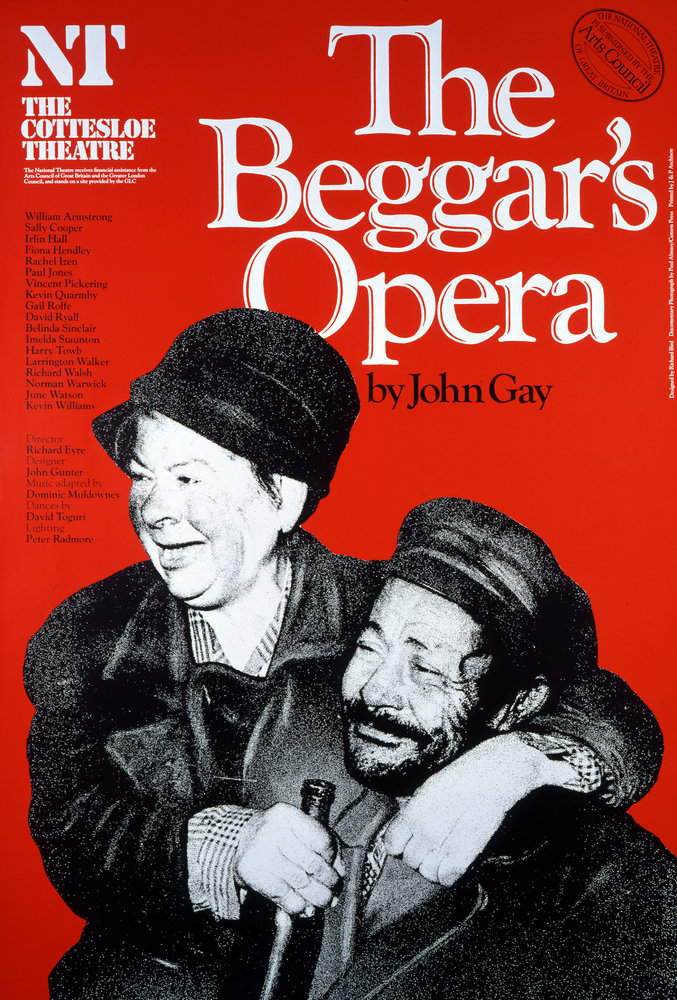 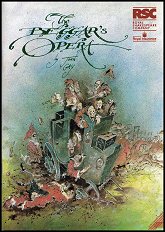 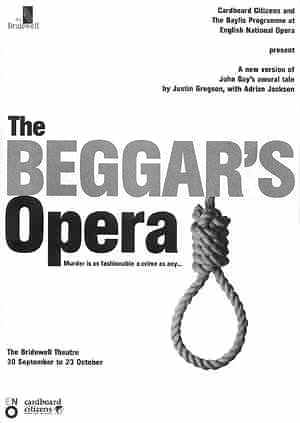 Type de série: Revival
Théâtre: Bridewell Theatre (Londres - Angleterre) Durée : 2 semaines Nombre : Première Preview : jeudi 30 septembre 1999Première : mardi 05 octobre 1999Dernière : samedi 23 octobre 1999Mise en scène : Adrian Jackson • Chorégraphie : Producteur : Avec : Dele Adagunodo (Peachum), Mary King (Mrs Peachum), Victoria Ward (Polly Peachum), James Staddon (Macheath), Alexandra Howlett (Jenny Diver), Sophie Langham (Lucy Lockitt), Graham Kent (Lockitt)Commentaires : This was a joint production between the English National Opera’s outreach programme and Cardboard Citizens, Britain’s only professional theatre company for the homeless. The anticipation was a telling comment on how little had changed from the 18th century’s attitude to the poor and the ruling class. But the end result was felt to be a bit of a mess: the show was frequently interrupted with video-diary sound-bites from both fictional characters and today’s real homeless projected on a bank of TV monitors; the action was held up with some strange karaoke-type pop songs including “Love and Marriage”, “It’s Not Unusual”, “Thank Heaven for Little Girls” and even “Jealousy”, sung by Lucy Lockit strapped into a wheelchair. . . It was generally considered to be well-intentioned, but an experiment that had not quite come off. 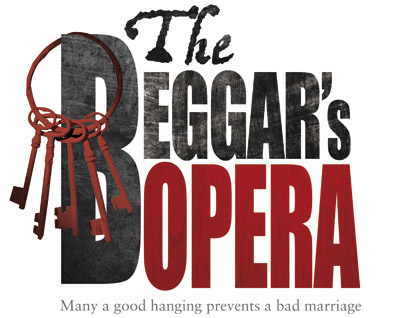 "Delightful production...Where the show most succeeds is in projecting Gay's point that the criminal underworld was a mirror image of high society...It's a fine show "
Michael Billington for The Guardian