In Moscow, in 1926, a housing crisis rages. In a cramped apartment, Ludmilla, a put-upon housewife, lives in dreamy complacency with her cheerful despot of a husband, Kolya. When one day, Kolya's handsome comrade, Volodya, arrives from the country, but can find no lodgings, Kolya offers him their sofa. When Kolya returns early from a business trip, he is shocked to discover that Ludmilla and Volodya have become lovers. Kolya moves out, but there is still nowhere to live, so he reluctantly returns, taking the sofa, leaving Ludmilla and Volodya the bed Kolya stalls the new couple's lovemaking with endless games of checkers, so that slowly, to Ludmilla's frustration, Volodya becomes more interested in the manly sport of checkers than in sex. Finally, Volodya reveals himself to be just as much a domestic despot as Kolya. So Ludmilla banishes Volodya to the sofa and takes the bed for herself. Ludmilla's "marriage" to the two men has already had its consequence as she is pregnant. The two men bicker over who is the father and finally decree: Ludmilla must have an abortion. Acquiescing, Ludmilla waits her turn in a frighteningly efficient clinic. But seeing a living, breathing baby out the window convinces her to leave, without the procedure. She packs up and abandons her two "husbands," declaring them unworthy to be fathers, and Kolya and Volodya find themselves alone in the dose Moscow flat. They have no choice: as Ludmilla rides alone into the exciting unknown. Kolya takes the bed and Volodya the sofa.

It is a sung-through and highly stylised piece, with an offstage voice working in much the same way as the caption cards did in the silent film version. It was a quirky and unusual piece and received a mixed critical response.

this was first seen off-Broadway in February 1996 where it won two Obie Awards and received seven Drama Desk nominations, including Best Musical. 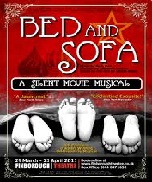 ‎"It is quite astounding to see a small (extremely well conducted) orchestra residing near the ceiling above the action" Jennifer Reischel, Fringe Review

‎"A startlingly honest and wonderfully expressive musical version of a lost art form with a haunting score, where not their conversation but the actors' facial expressions and gesturing become a focal point in understanding their feelings and journey." Jennifer Reischel, Fringe Review

‎"This is the most delightfully unusual musical to see at the Finborough.... It is ingeniously designed with the tiny flat complete and in character while the string musicians perform the music with a sense of delightfully warm tones on the roof of the flat... It is a completely jelled production....a gem that sparkles and brings a wit with compassion. Don't miss it." Blanche Marvin, London Theatre Reviews

‎"There is a nicely witty edge to a song in which the woman realises that both she and the USSR government have bad luck in choosing their men, and a melodic trio in which the three sing of their separate dreams is lovely and satisfyingly complex in a Sondheimish way, recalling the 'Soon/Now/Later' trio in A Little Night Music while retaining its own individual sound." Gerald Berkowitz, London Theatre Guide

‎"A shower of five stars for all: the performers, the creative team, and especially to Luke Sheppard, who directs with a fine-tuned sensitivity and an excellence that belies his years. Very impressive: if the run doesn't sell out, I'll eat my shapka." Vera Liber, British Theatre Guide

‎"The scene at the movies was so focused I couldn't resist turning my head in case more magic was taking place behind me. But the magic was in front of me." Vera Liber, British Theatre Guide

‎"The set is fabulous in its realism, replicated almost exactly, with its Stalin calendar and her photo on the wall. David Woodhead has squeezed in all the furniture and the Bolshoi pediment... Bulgakov's Professor Woland must have taken over the Finborough, for how else to explain that all fits with room to spare for an audience. Where there's a will..." Vera Liber, British Theatre Guide


‎"whether you are a fan of Soviet satire and Soviet films of the 1920s or not matters not a bit to delight in Polly Pen and Laurence Klavan's faithful but oh so witty rendering of Abram Room's 1927 silent movie" Vera Liber, British Theatre Guide