The musical opened on May 4, 1976 at the Mark Hellinger Theatre and closed on May 8, 1976 after 7 performances and 13 previews. It was co-directed and co-choreographed by Gilbert Moses and George Faison.
The musical examined the establishment of the White House and its occupants from 1800 to 1900. Primarily focusing on race relations, the story depicted (among other incidents) Thomas Jefferson's then-alleged affair with a black maid, James Monroe's refusal to halt slavery in Washington, the aftermath of the American Civil War and Andrew Johnson's impeachment. Throughout the show, the leading actors performed multiple roles: Ken Howard played all the presidents, Patricia Routledge all the First Ladies, and Gilbert Price and Emily Yancy played the White House servants, Lud and Seena. Future Broadway stars Reid Shelton, Walter Charles, Beth Fowler and Richard Muenz appeared in ensemble roles, as did the young African American baritone Bruce Hubbard.
The show was originally intended to be performed as a play-within-a-play, with the show's actors stepping out of character to comment on the plot and debate race relations from a modern standpoint. But this concept was almost entirely removed during the show's out-of-town tryouts in Philadelphia and Washington, D.C. The musical's original director, Frank Corsaro, choreographer, Donald McKayle, and set and costume designer, Tony Walton, left the production during these try-outs.
By the time the show opened on Broadway, little of the metatheatrical concept remained, aside from certain scenic and costume elements and a few musical references (most notably, the opening number "Rehearse!").
Discouraged by the critical and public response to the work and angry that during the tryouts much of his music had been condensed and edited without his consent, Bernstein refused to allow a cast recording of the musical.
Critical reaction
The initial critical response to the show was resoundingly negative. Critics savaged Lerner's book while largely praising Bernstein's score. Only Patricia Routledge was spared, thanks mostly to her second act showstopper "Duet for One (The First Lady of the Land)" for which she received a mid-show standing ovation on opening night in New York. After Bernstein's death a concert version of the score, retitled A White House Cantata was recorded and released. That version tended to be reviewed as a classical work rather than a Broadway musical, a tendency encouraged by the casting of the leading roles with opera singers. Differences in the score and performance style make it impossible to judge the original musical fairly from the later recording. The score is considered by many musical theater historians and aficionados to be a forgotten, or at least neglected, masterpiece. Some of the songs have enjoyed some fame outside the show including "Take Care of This House," "The President Jefferson Sunday Luncheon Party March" and "Duet for One", a tour-de-force for a single actress portraying both Julia Grant and Lucy Hayes on the day of Rutherford B. Hayes's inauguration detailing the exhausting vote counts that had many questioning his legitimacy.
Author Ethan Mordden noted that "Bernstein and Lerner created an astonishingly good score, even a synoptic all-American one, with fanfare, march, waltz, blues. It's Bernstein's most classical work for Broadway."
Reuse of material in other works
As with his previously abandoned projects, Bernstein used portions of the score in subsequent works. In Songfest, for example, the setting of Walt Whitman's poem "To What You Said" as a baritone solo was a reworking of the original prelude of the show, in which the chorus hummed a melody played by the violoncello in the Songfest version. (In the show, this music was moved to the emotional low point of the second act, used as background to a Presidential funeral.) The occasional piece Slava! A Political Overture, written in honor of Bernstein's friend Mstislav Rostropovich, blended two numbers from the show, the up-tempo "Rehearse!" and "The Grand Old Party." Early in the opera A Quiet Place, the music for the aria "You're late, you shouldn't have come" derives from that of "Me," a song that in the original show established the meta-theatrical concept that was eventually abandoned. (Some of the music for "Me" can be heard in the Broadway score, most memorably in the song "American Dreaming.") An instrumental section of "The President Jefferson March" was reused in the final movement, "In Memoriam and March: The BSO Forever," of the Divertimento.
Subsequent revivals
The show's only significant revival was a 1992 Indiana University Opera Theatre production, which used a pre-Philadelphia draft of the script and included portions of Bernstein's music that had been excised on the road to Broadway. This production also played briefly at the Kennedy Center in Washington, D.C. in August 1992.
A White House Cantata
After his death in 1990, Bernstein's children and associates sifted through the many variations and revisions of the score and authorized a choral version entitled A White House Cantata, which deleted nearly all the remaining play-within-a-play references. (Some can still be heard in the duet "Monroviad.") BBC Radio broadcast the London debut of this work in 1997, and three years later Deutsche Grammophon released an abridged performance in a CD recording. Both the London concert and the DG recording were conducted by Kent Nagano with the London Symphony Orchestra. The Leonard Bernstein estate controls the licensing of performances of the cantata version, but refuses to allow the performance, recording, or publication of the original musical.


(Broadway)
Act I
Overture
Rehearse!
If I Was a Dove
On Ten Square Miles by the Potomac River
Welcome Home, Miz Adams
Take Care of This House
Invitations / Lud's Letter
The President Jefferson Sunday Luncheon Party March
Seena
Sonatina
I Love My Wife
Auctions
The Little White Lie
We Must Have a Ball
The Ball

Act II
Entr'acte
Forty Acres and a Mule
Bright and Black
Duet for One (First Lady of the Land)
Keep Your Head Up, Mr. Lincoln
When We Were Proud
The Robber Baron Minstrel Parade
Pity The Poor
The Mark of a Man
The Red, White and Blues
Finale (Rehearse!) 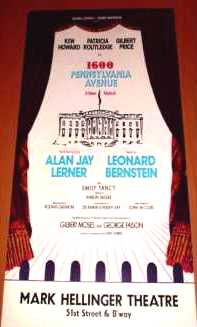