If you could live forever, would you? When Winnie Foster discovers the magical secret of the Tuck family, she embarks on an extraordinary adventure that will change her life forever. Take a journey you'll never forget in this powerful new musical about love, family and living life to the fullest.

Création
Tuck Everlasting was originally slated to make its world premiere at the Colonial Theatre, in Boston, Massachusetts, from July 28 to August 28, 2013. However, the premiere was cancelled because of “a lack of theatre availability for its planned subsequent production in New York." It subsequently made its world premiere at the Alliance Theater in Atlanta, Georgia. The production ran from January 21 to February 22, 2015.
In its review of the Atlanta production, the New York Times said "Indeed, the most dazzling passage is probably the culminating ballet, wordlessly conveying the circle of life, as it were, without benefit of spectacular puppetry and a familiar pop song. It had the woman next to me repeatedly wiping away tears, and I understood how she felt." Variety said "Despite its existentialism-lite sweep, this is an intimate family story of love, loss and the purpose and power of storytelling in the American folk tradition of Twain and Wilder."

Broadway
The musical began its Broadway previews on March 31, 2016 at the Broadhurst Theatre, with opening night on April 26, 2016. The production closed on May 29, 2016 after 28 previews and 39 regular performances.

Atlanta premiere
The musical numbers which appeared in the original 2015 Alliance Theatre production in Atlanta, were:
“Live Like This”
"Good Girl, Winnie Foster”
“Come to the Fair”
“Top of the World”
“Story of the Tucks”
“My Most Beautiful Day”
“One Small Story”
“Time”
“Jump the Line”
“Seventeen”
"Everything’s Golden”
“For the Best”
“You Can’t Trust a Man”
“The Wheel”
“Everlasting”
“Everlasting Ballet” 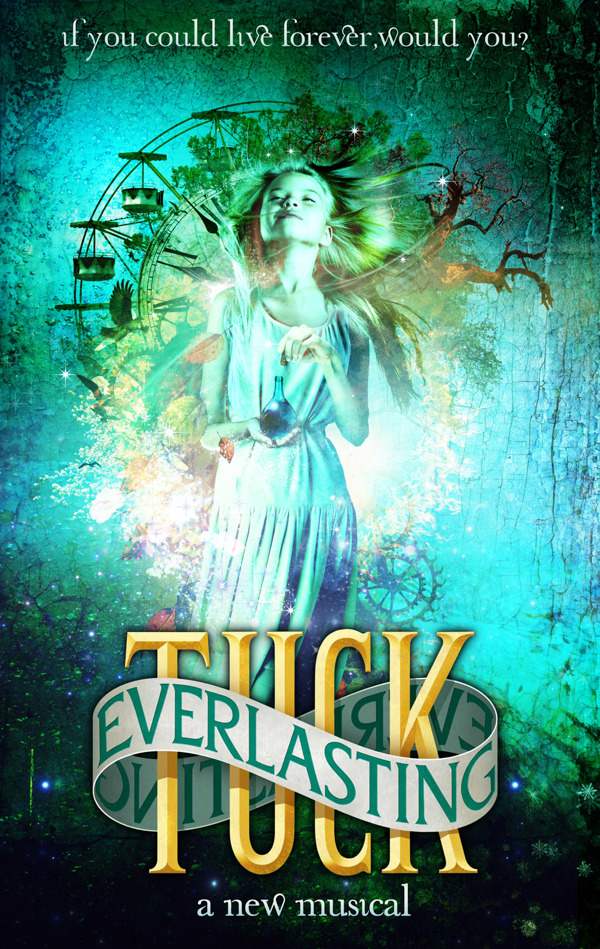 "It’s pretty crazy that this story about regret, mortality and big life choices — make that 'eternal life or death' choices — could end up so toothless." Elisabeth Vincentelli for New York Post

"I can admire several elements here; they just seem slightly misjudged or misaligned. For all Tuck’s thematic concerns with immortality, I doubt a long life awaits it in this competitive market for Broadway family fare." David Cote for Time Out New York

"The show that opened Tuesday at the Broadhurst Theatre is wonderfully crafted, a Nicholaw hallmark. Poignancy mixes well with humor, the songs are fresh and sweet, the set is blissful and the performances honest. It has a polished feel. All of the parts work smartly." Mark Kennedy for Associated Press

"Although the show... boasts solid production values and professionalism thanks to director-choreographer Casey Nicholaw and a cast filled with Broadway veterans, it's likely destined for an all-too-finite life on the Great White Way." Frank Scheck for Hollywood Reporter

"The show’s warmhearted tale and handsome production values also bode well for a family-centric market, especially on the road. But more jaded theatergoers will likely find the proceedings not so much timeless as time-consuming — a production rooted in the twee of life." Frank Rizzo for Variety