«Only Fools and Horses»

This new musical, co-written by comedian Paul Whitehouse and son of show's creator, John Sullivan, this production will put these legendary characters onto the West End stage for the very first time. The story will revolve around Del Boy looking for love, Rodney preparing for his marriage to Cassandra, and Grandad taking stock on his life.

Only Fools and Horses will star Paul Whitehouse as Grandad, Tom Bennett as Del Boy and Ryan Hutton as Rodney. It will also have songs by Whitehouse and Jim Sullivan, with additional music by John Sullivan and Chas Hodges (of Chas & Dave, who wrote the original theme tune).

First broadcast on the BBC in 1981, Only Fools and Horses was the quintessential British comedy show. Starring David Jason as South London market trader Derek ‘Del Boy’ Trotter and Nicholas Lyndhurst as his younger brother Rodney, the Peckham brothers spent their lives trying to get rich quick with a number of schemes devised through their company, Trotters Independent Trading Co. Their yellow three-wheeler Reliant Regal is an icon and can be spotted on the odd road across Britain if you’re lucky…

The series originally ran for 10 years with a number of specials, and spawned two BBC spin-offs: The Green Green Grass focused on the life of Boycie and his family in the countryside, and Rock and Chips, a prequel written by Only Fools and Horses creator John Sullivan in 2010. 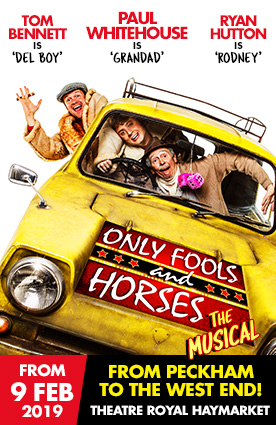 Only Fools and Horses (2019-02-Haymarket Theatre-London)

Type de série: Original
Théâtre: Haymarket Theatre (Londres - Angleterre) Durée : 1 an 2 mois Nombre : Première Preview : samedi 09 février 2019Première : mardi 19 février 2019Dernière : Open end, ouvert actuellement jusqu'au sam. 25 avril 2020Mise en scène : Caroline Jay Ranger • Chorégraphie : Producteur : Avec : Tom Bennett, Ryan Hutton, Andy Mace, Dianne Pilkington, Pippa Duffy, Jeff Nicholson, Samantha Seager, Peter Baker, Pete Gallagher, Adrian Irvine, Adam Venus, Chris Kiely, Oscar Conlon-Morrey, Melanie Marshall, Chris Bennett, Lee Van Geleen, Lisa Bridge, Philip Childs, Andrew Bryant, Samantha Lane, Bradley JohnPresse : In The Times, Dominic Maxwell wrote: 'Do we need an Only Fools and Horses musical? Frankly, these days we could do with all the fun we can get. Which is why it's such a shame that this effort by Paul Whitehouse and Jim Sullivan — son of the great sitcom's creator and writer, John Sullivan — is such an odd mix of the tried-and-tested and the new-and-half-cocked. It's got lovely moments. It's got moments you wouldn't buy off the back of a three-wheeled van.'
Mark Lawson in the Guardian said: 'The finest collection of vintage gags on the London stage should allow the show to make a fair amount of what Del Boy calls 'lovely jubbly'. But, as a musical, a few too many of the songs are, to borrow again from the Trotter lingo, plonkers.'
And Dominic Cavendish in the Daily Telegraph wrote: 'Only generous-hearted fools and die-hard fans need apply within for this endearing but theatrically under-achieved stage-musical version of the much-loved BBC sitcom.'
However, Rachael Bletchly was more positive in the Daily Mirror, writing: 'Del's still got the sheepskin but still 'hasn't got a pot to p*** in', Grandad's back in his armchair, suffering with his Chalfonts, and Rodders is still punching above his weight romancing classy Cassandra, played by Pippa Duffy.
'But now they're all singing and dancing too, truly making this joyous nostalgic romp down Hooky Street the creme de la menthe. No wonder tickets are as rare as a genuine Rolex in Del's suitcase.'
Alun Hood wrote in WhatsOnStage: 'It's not a well-crafted musical in the traditional sense but then you'd expect a stage life of the Peckham Trotters to be a bit rough-round-the-edges. It has heart, wit and warmth by the bucketload.'
And Mark Shenton for London Theatre said: 'Just how much you warm to it will largely depend on your wish to revisit a beloved TV series in this new but hardly revelatory format.
'As directed and choreographed by Caroline Jay Ranger, the pace is uneven; songs fail to emerge organically out of the action, but feel bolted onto a version of a TV script.'