Kurt Weill and Maxwell Anderson’s Knickerbocker Holiday played for just five months on Broadway, but its legacy to the American musical theatre is invaluable. Here was a musical infused with ideas, and, whether or not one agreed with Anderson, his book dealt with fresh subject matter and had a prickly political viewpoint. Some critics found the book somewhat dour, but Anderson’s script is highly amusing and strikingly theatrical (one character has been twice killed by Indians and still manages to stay alive, and when he dies again and his funeral rites are in progress, he returns to life to testify on someone’s behalf despite a comment that dead or alive he’s a “completely unreliable” witness).

The musical begins in 1809 when Washington Irving (Ray Middleton) decides to write a history of Old New York, in the days when the Dutch ruled a Manhattan Island known as Nieuw Amsterdam. As Irving takes pen in hand to start his story, his study materializes into the New York of 1647, and in a welcome conceit he weaves in and out of the action, introducing (and interacting with) the characters, commenting upon and sometimes interrupting the story, and occasionally participating in the songs. The hero of Irving’s tale is Brom Broeck (Richard Kollmar), and Irving tells Brom that in order to make his character agreeable to his readers he must understand what makes Brom tick. Brom defines himself by informing Irving that he’s the “beginning of a national type,” an American who doesn’t like to take orders from Big Government. And Brom and Irving’s grand and irresistible duet “How Can You Tell an American?” sums up the musical’s thesis that Americans don’t need bureaucrats to dictate their every move. And this in a nutshell was Anderson’s philosophy. The nation needs a government run by competent and well-meaning amateurs, not one infested by professional bureaucrats who enforce unwanted rules and regulations on the populace. In the era of the New Deal, this belief was somewhat iconoclastic and Knickerbocker Holiday stood alone. The era’s politically oriented shows were either direct left-wing onslaughts against both the government and the status quo or were apologists for Franklin D. Roosevelt’s administration. These shows believed in big government, albeit their own kind of big government. Knickerbocker Holiday wanted none of this. In his preface to the published script, Anderson states that government must be “constantly watched” and “drastically limited” in its scope because a “government-dominated economy” will result in the “loss of individual liberty in thought, speech and action.” He further notes that “social security” is a step away from the “paternal state,” and those “fed” by government will become little more than “slaves or cattle.” Virtually the entire story took place in The Battery within a period of two days. Besides Brom, we meet the city’s shady councilmen (which include a Roosevelt, a Vanderbilt, and a Van Cortlandt), all of whom won’t tolerate an iota of graft and corruption unless they have a financial share in it. The town is in the midst of a holiday because the citizens and councilmen are anxiously awaiting the arrival of their new governor Pieter Stuyvesant (Walter Huston). In honor of the governor’s visit, the councilmen plan to top off the day’s festivities by hanging someone. And who better for the gallows than the independently minded Brom? This upstart bows to no one, he calls out tyranny and dishonesty, and he’s in love with Councilman Tienhoven’s daughter Tina (Jeanne Madden). Although Stuyvesant pardons Brom, it becomes clear the new governor is far more corrupt than the council members and that he intends to run Manhattan with an iron fist. He also has his eye on Tina, and when he discovers she’s in love with Brom he decides to go ahead with the young man’s execution. But in a deus ex machina moment, Irving interrupts the action and demands a word with Stuyvesant. As the author who will shape the story of New York’s early days, the writer informs Stuyvesant that he must again pardon Brom. If posterity reads an account of a tyrannical governor, Stuyvesant’s reputation will be in tatters, but future readers will harbor good thoughts about a kind and just governor. Stuyvesant cottons to the idea that one day he’ll be known as a “Manhattan Saint Nicholas,” and furthermore decides that he qualifies as an American because he too despises taking orders from anyone.

The musical premiered on Broadway at the Ethel Barrymore Theatre on October 19, 1938 and closed on March 11, 1939 after 168 performances. It was produced by the Playwrights' Company and directed by Joshua Logan. The original production starred Walter Huston (as Peter Stuyvesant), Richard Kollmar (as Brom Broeck), Jeanne Madden (as Tina), and Ray Middleton (as Washington Irving). Burgess Meredith, a friend of Weill's, was originally set to play the romantic young lead Brom Broek, but he left when he saw the villainous Peter Stuyvesant character growing into a more and more lovable and important role, upstaging his.

Burt Lancaster starred in a revival production of the Los Angeles Civic Light Opera at the Dorothy Chandler Pavilion at the Music Center, L.A in June, 1971. The cast also included David Holliday and Jack Collins.

The musical premiered in Germany on September 25, 1976, at the Thalia Theater in Hamburg.

Film version
The 1944 film version, written by Thomas L. Lennon, starring Nelson Eddy as Broeck, Constance Dowling as Tina, and Charles Coburn as Stuyvesant, not only removed most of the songs and added new ones not by Weill and Anderson, but watered down the political allegory considerably, having been released during World War II. 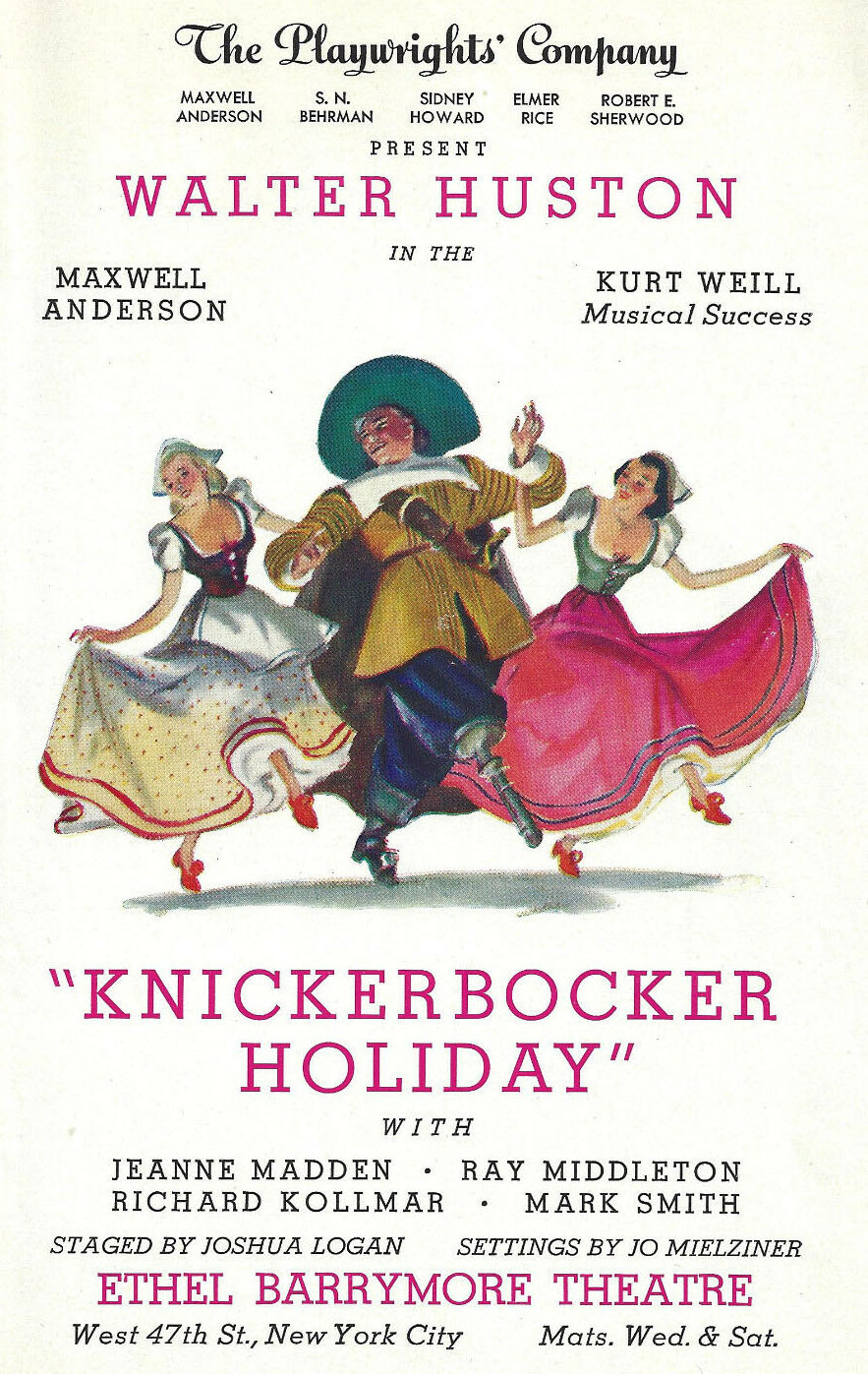