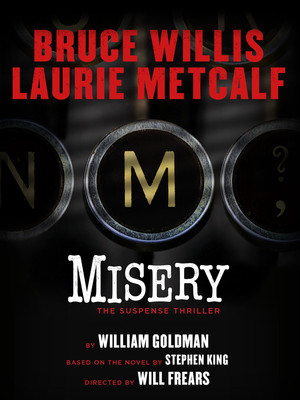 "The production... which stars a vacant Bruce Willis (in his Broadway debut) and a hardworking Laurie Metcalf, sustains a steady, drowsy room temperature throughout." Ben Brantley for New York Times

"As lovable as wise-cracking Bruce Willis was in “Moonlighting” and the “Die Hard” films, he is deadly dull in the stage version of Stephen King’s novel. This big Hollywood star musters just enough emotion to stretch from A to B in his Broadway debut." Joe Dziemianowicz for New York Daily News

"It’s genre theater that’s gotten rare on Broadway, which is too bad: The show is shameless, and that’s what makes it so fun." Elisabeth Vincentelli for New York Post

"Metcalf, as always, gives 120%, and David Korins’s set is no slouch, either—a picture-perfect mountainside cottage that revolves to show exterior views and other rooms in Annie’s hideaway of horrors. Likewise, the pleasures of this production (perfunctorily staged by Will Frears) are mostly visual and all predictable." David Cote for Time Out New York

"In the end, "Misery" isn't total misery. It's just weird. Apart from the fact that it's a completely unnecessary adaptation, you oddly start to root for the monster, not the bona fide action hero." Mark Kennedy for Associated Press

"Thanks largely to the wacko humor infused throughout Metcalf's diabolically folksy performance, and to the ingeniousness of David Korins' revolving set — which invites us to follow the action from room to room exactly like a camera — this Misery is an enjoyable enough rerun that recaptures some of its predecessor's B-movie pleasures." David Rooney for Hollywood Reporter

"Despite the physical intimacy imposed by its stage setting, William Goldman’s theatrical version of the 1987 Stephen King novel lacks the stifling sense of claustrophobia that made Rob Reiner’s 1990 movie version starring Kathy Bates and James Caan so unnerving. Or maybe the atmosphere of fear and dread was just wiped out by the show’s undercurrents of arch humor." Marilyn Stasio for Variety