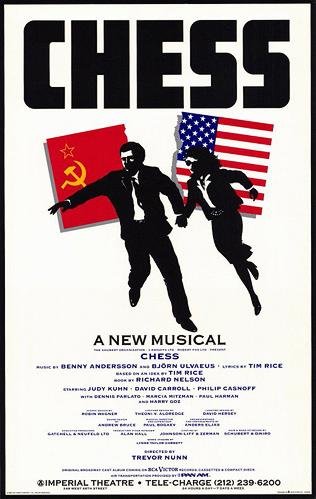 Type de série: Original Broadway
Théâtre: Imperial Theatre (Broadway - Etats-Unis)
Durée : 1 mois 4 semaines Nombre : 17 previews - 68 représentationsPremière Preview : Monday 11 April 1988Première : Thursday 28 April 1988Dernière : Saturday 25 June 1988Mise en scène : Trevor Nunn • Chorégraphie : Lynne Taylor-Corbett • Producteur : Avec : Florence Vassy … Judy Kuhn
Freddie Trumper … Philip Casnoff
Anatoly Sergievsky … David Carroll
Svetlana Sergievsky … Marcia Mitzman
Molokov … Harry Goz
Arbiter … Paul Harman
Gregor Vassy … Neal Ben-Ari
Young Florence … Gina Gallagher
Walter … Dennis Parlato
Nickolai … Kurt JohnsCommentaires longs: Like musical theater, chess is an unpredictable game. There was no reason to suspect that London’s success could not be replicated in New York. Chess lasted for 3 years in London, but the New York production closed in less than 2 months.
The original story was thought to be too convoluted, and it seemed to put the Americans in a bad light. Richard Nelson was hired to revamp the entire story. Unfortunately he diluted the parts that might have caused discomfort among the American audience. He took away some of the lighter touches from the original story, and made it depressingly serious. And he added one character and one subplot too many.
The show opens in Bangkok, and moves to Budapest for the second act. Instead of having two tournaments, the American version is confined to just one tournament. A new character, Walter, who is Freddie’s business associate, is added. Freddie’s second, Florence, now has a long lost father whom she is asked to help defect to the West. However, in exchange for this favor, the KGB asks her to persuade her new-found lover and defector, Anatoly, to return to Russia.
It was probably not any one single factor that was responsible for Chess’s American demise. Some blamed Richard Nelson’s book. Others blamed the poisonous reviews by several influential theater critics, like New York Times' Frank Rich. 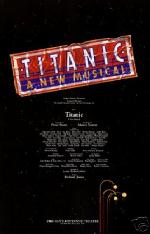