RHODA KOENIG for THE INDEPENDENT says, "Gooey Bombay mix that fails to fulfil its promise."

RICHARD MORRISON for THE TIMES says, "To turn this mishmash into a hot ticket is going to take more than a spoonful of curry powder."

NICHOLAS DE JONGH for THE EVENING STANDARD "It's a bold, inventive shot at something new that misses the target. "

CHARLES SPENCER for THE DAILY TELEGRAPH says, "Though there is much to admire in Bombay Dreams - notably Rahman's wonderfully fresh, exciting and sometimes yearningly romantic score...there is much more that disappoints."

MICHAEL BILLINGTON for THE GUARDIAN says, "...clumsy, over-plotted book." And goes on to say, "The acting honours are stolen by .... Raad Rawi as the white-coated Mafia boss and Shelley King as an astringent gossip colum nist."

JOHN PETER for THE SUNDAY TIMES says, "Bombay Dreams is a spectacular tribute to Bollywood, though it can't escape that genre's limitations." 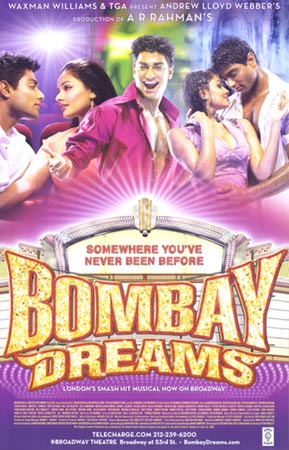