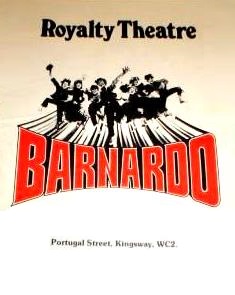 Type de série: Original
Théâtre: Peacock Theatre (Londres - Angleterre)
Durée : Nombre : 43 représentationsPremière Preview : InconnuPremière : Wednesday 21 May 1980Dernière : InconnuMise en scène : Ernest Maxim • Chorégraphie : Alain de Hay • Producteur : Avec : James Smillie (Dr Barnardo), Fiona Fullerton (Syrie Elmslie), and a cast including 20 ChildrenCommentaires : This was one of the great disasters of musical theatre. It contained embarrassing moments like Mrs Barnardo thrusting her dead baby into the arms of her husband for him to sing about “My Son”, a dreadful duet for two poor urchins singing a song called “Cor”, and reviews which said things like “This is a case for the NSPCC” . The show was in financial trouble very early on, with a receiver called in, and the receiver quarrelling with the show’s publicists - they refused to place any more adverts or posters unless they were paid - and then furiously criticising the reviewers for their bad notices, claiming this was a show which the audiences loved.Presse : "Written, composed and directed by Ernest Maxin (to whom we raise our hatchets), Barnardo at the Royalty is everything one expects a British musical to be: a collection of familiar-sounding tunes and empty lyrics tethered to a book deprived of wit or logic. Songbook, A Night in the Ukraine and Talent were recent shining exceptions to the rule, but here we are back with the showbiz musical that tells us less about Dr Barnardo in three hours than a programme note in 1,500 words." The Guardian - 23 may 1980